The traffic cops allegedly ripped off the number plate of a civilian’s car, which damaged the paint on parts of the bumper. Two Birch Acres friends have opened a case of malicious damage to property and lodged a complaint with the metro police after allegedly being bullied by EMPD officers in Ekurhuleni, Kempton Express reports.

According to Robert van Zyl, 32, and Llewellyn Swanepoel, 25, they were manhandled by metro police officers who had stopped them at a routine roadblock on Mooirivier Drive.

It is alleged they ripped off the front number plate of Swanepoel’s car, which damaged the paint on parts of the bumper.

“We were driving up Mooirivier towards Checkers on our way to buy airtime, and just as we approached the gym on the left-hand side of the road, we were pulled over by the metro police who asked to see my licence,” Swanepoel said.

“Without even looking at it, he went straight to the front of the car and told me my licence plate was wrong, and I asked what he meant.”

“I did not understand because I bought this car two and a half years ago, and I have been through roadblocks, changed my licence disc and completed roadworthiness tests, but nothing was ever wrong.” 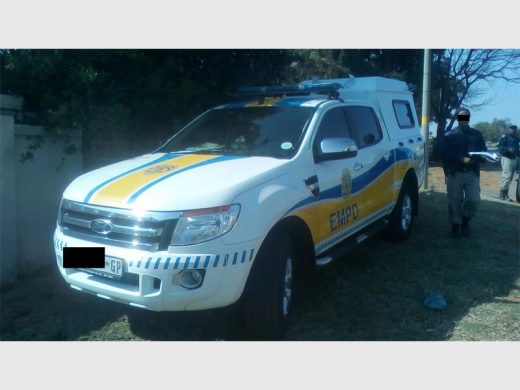 Image taken at the scene during the roadblock.

The cop allegedly ripped off the number plate and threw it in the back of his van. At that point, Van Zyl got out of the car to see what was happening.

The friends say as soon as he got out, a second metro officer allegedly started to push him and shoved his finger in Van Zyl’s face.

“In defence, I tried to get his hands off of me, but he still pushed me a couple of times,” Van Zyl explained.

“I just want justice for what they did. And although I kept apologising the whole time because there was an exchange of words between us, they said to me, ‘apologise for what?’ I eventually calmed down and apologised again and said please let us go. When we tried to go to the car one of them again pushed me from behind,” Van Zyl claimed.

“They even went as far as threatening me, and said he’s gonna ‘mark me’ and get taxi drivers to ‘moer me’,” Swanepoel further claimed.

SWANEPOEL shows how the metro police ripped off his front number plate because it was “false”.

The friends also said the cops allegedly kept swearing at them throughout the confrontation.

“At some point during the altercation, we asked them for their names. They told us it had nothing to do with us, and instead, one of the cops opened his jacket to show us an EMPD badge and said, ‘that’s my name’,” Van Zyl said.

He received a fine for incorrect letters and colours on the front number plate, but nothing was said about the rear number plate, which was exactly the same.