Motorists who stopped by grabbed as much meat as possible instead of helping the vehicle occupants. The empty meat boxes left behind by looters.

A Knysna resident says she has lost her faith in humanity after people “descended like vultures” on an overturned meat truck when it overturned, Knysna Plett Herald reports.

The driver of the truck died on the scene while, according to her, the looters made off with as much meat as they could carry or pile into their vehicles.

Janine le Grange, who stays next to the N2 on the George side of the White Bridge, says the truck was travelling towards Knysna.

“The impact of the truck overturning and landing in our yard had us jumping out of our beds in fear. We were on the scene about 25 minutes before the emergency services and police arrived. We heard the passenger, who we suspect was thrown from the truck, shouting for help. My husband Lohan and a neighbour went to help. Our neighbour crawled into the cabin and found the driver already dead. We couldn’t believe the helper did not have a scratch. It is a miracle that he survived.”

Le Grange says the next minute, cars stopped at the scene, and the occupants started helping themselves to the spilt cargo on the road. 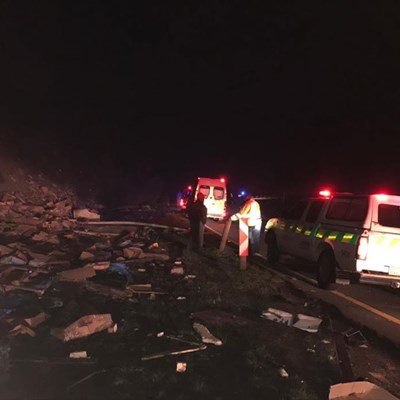 Emergency services on the scene in the early hours of Sunday morning 3 September, with what’s left of the truck’s cargo.

“Some had so much meat that they dropped it as they crossed the N2 returning to their vehicles. Passing vehicles hit the packets of meat the looters dropped,” she says.

Another eyewitness, who does not want to be named, says a good number of the drivers who stopped were clearly under the influence.

“The courteous cop on the scene helpfully ‘assisted’ them in loading meat into their car boots, and as soon as they started driving, he pulled them off and gave them a breathalyser test,” he said, alleging that at least four people were arrested. The cabin of the truck was completely crushed. Photos: Supplied

“The 58-year-old driver who is from the Eastern Cape, lost control of the vehicle and died on the scene. A passenger survived the accident,” he said.

Pojie confirmed it was a consignment of imported frozen meats. He said he had no knowledge of the allegations of theft and driving under the influence.