Touch, a Chinese sex-products retailer, on Thursday launched its “Shared Girlfriend” service in Beijing, featuring Chinese, Russian, Korean, and Hong Kong versions, as well as an Amazon-like “Wonder Woman” who comes armed with sword and shield.

Like many of China’s pioneering shared-economy products, the life-sized silicon seductresses are reserved via a phone app for up to a week a time.

Touch, which is based in the southeastern city of Xiamen, then delivers them to customers who can also pre-select different clothing outfits and hair styles, plus accoutrements like handcuffs and whips.

Clients can even have their date “warmed up” before delivery and, for an extra fee, have them equipped with a device that voices various sounds when man-handled. 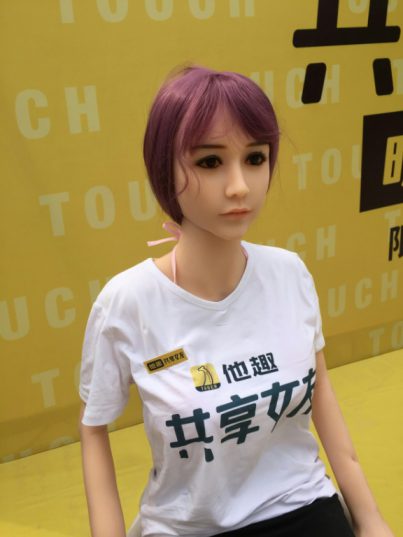 Touch, a Chinese sex-products retailer, on Thursday launched its “Shared Girlfriend” service in Beijing, featuring Chinese, Russian, Korean, and Hong Kong versions, as well as an Amazon-like “Wonder Woman” who comes armed with sword and shield.

They are available for short-term companionship starting at 298 yuan ($45) per night, but users must first transfer an 8,000 yuan ($1,220) deposit that is refunded afterward.

Touch touts the dolls as feeling like “real humans”.

“They have perfect bodies, are totally submissive and can meet the needs of the single home boy,” a company statement said.

“With one touch of a key, you are no longer single!”

The company said “Shared Girlfriends” will help address the needs of the country’s millions of men who are unable to find spouses due to a nationwide gender imbalance.

The dolls also can serve as companions for men separated from their spouses due to work or other reasons, it said.

To address the obvious concerns about hygiene, the company allows users to detach the doll’s lower half, to be kept for the next use, when a new top half will be delivered.

Touch said after a trial in Beijing it plans to launch the service nationwide.

Led by millions of shareable bikes on Chinese city streets, and backed by a torrent of speculative venture capital, China has gone sharing mad with everything from treadmills to karaoke booths available for short-term rent at the tap of a smartphone.