His family was offered R5k as an apology for his death. 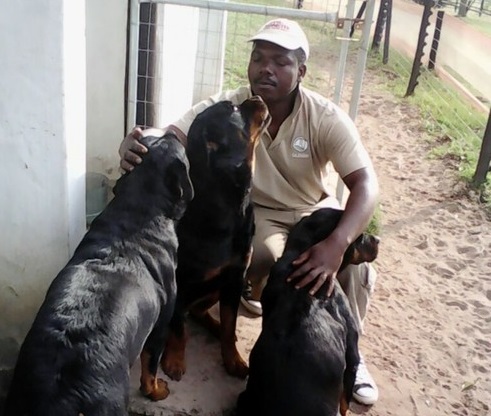 Collin Mthembu in better times with the three dogs who would end up killing his brother Khulekani.

The family of a security guard killed by three Rottweilers at a Shakaskraal stable yard recently was given R5 000 by the owners “to say sorry”, North Coast Courier reports

Khulekani Mthembu worked at La Maine stable yard, a few kilometres inland of Shakaskraal village, as a security guard along with his brother, Collin.

While at work, the dogs attacked and killed Khulekani, in spite of the fact that he had been feeding them for the past three months.

The yard is popular with local horse owners, stabling about 24 horses.

One horse owner said he was angry that this terrible tragedy had been deliberately kept “under the radar”.

“We were working together, saving money to build a nice house for our family at Wumbana area, between Eshowe and Gingindlovu. Now that he is dead, I have lost hope that I will achieve our dream,” he said.

He said his brother, who was 33 years old, has been working there for the past three months and part of his job was to feed the dogs.

Speaking from their family home near Gingindhlovu, Collin Mthembu described his brother as a very friendly, helpful person.

“The dogs knew him, and I am failing to understand why they would attack him. They attacked him when he was letting them out of their cage,” said Mthembu.

It is believed the dogs have since been removed from the property, but it has not been possible to confirm whether they have been put down or not.

Collin said he had left La Maine because he could not work where his brother had died. Khulekani Mthembu was killed by three rottweilers at his place of work at La Maine Equestrian Estate.

He said it is was not the first time these dogs attacked a worker. Once before they had attacked a female labourer who had spent about nine months recovering in hospital.

Collin confirmed that La Maine management had paid Khlekani’s family R5000 “to say sorry” for the death of his brother.

La Maine manageress Christine Cooper refused to comment, demanded to know who had called the paper, and said this was “not the kind of thing we want in the Courier”.

Umhlali police confirmed the death and said an inquest docket had been opened.

A Ballito-based dog trainer, Scott Farlam, said one of his biggest concerns with working breeds is the number of poorly bred animals.

“Protection dogs like German Shepherds and Rottweilers have had poor traits like aggressive temperaments bred into them. Aggressive behaviour often coincides with nervous aggression,” said Farlam.

He said any good breeder would know the most successful protection dogs possess the exact opposite – confidence.

Farlam said there were a number of factors that played a part in the training and upbringing of a dog.

“Dogs are pack animals and thus form part of a complex hierarchy. We as a dog’s caregiver are responsible for the role of the Alpha in the pack and as part of our responsibility we provide food, shelter, love and discipline. No balanced dog will ever, and I repeat myself, ever, attack its owner!”

Khulekani is survived by his six-year-old son, who is in grade one.