Disabled Olympic athlete Oscar Pistorius is expected to close his case in defence of a murder charge early this week. 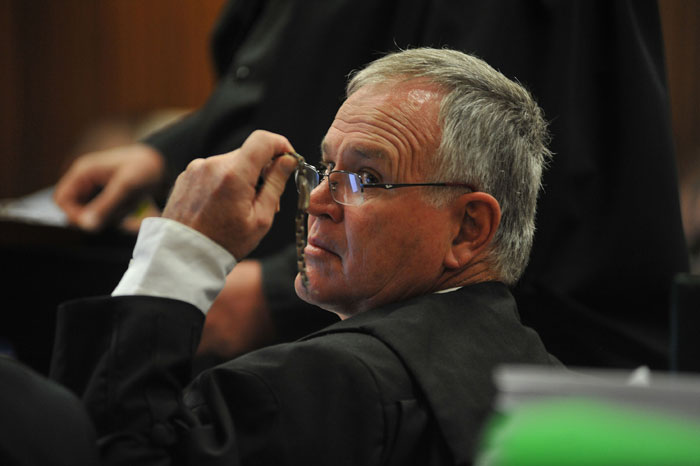 Defence lawyer Barry Roux displays a watch of a witness to some of his team members during the murder trial of paralympic athlete Oscar Pistorius at the high court on Monday, 24 March 2014. Pistorius is on trial for the premeditated murder of his model girlfriend Reeva Steenkamp in February 2013. Picture: Ihsaan Haffejee/Pool

It is expected that the trial will be postponed for several weeks for the State and Defence to compile written heads of argument.

Defence advocate Barry Roux earlier indicated he would call experts to testify on the similarities between the sound of shots fired from a pistol and a cricket bat hitting a wooden door as well as how much Pistorius sounded like a woman when he was screaming in fear and if neighbours could have heard screams.

The State closed its case on the 15th day of the trial, after calling 21 witnesses in an attempt to prove that the “Blade Runner” had deliberately shot and killed his girlfriend Reeva Steenkamp after a heated argument at his house in the east of Pretoria on Valentine’s Day last year.

Several neighbours testified they had heard a woman screaming in fear, followed by shots, but Pistorius testified that he had accidentally shot Steenkamp behind a locked toilet door because he thought she was an intruder.

He said he and Steenkamp had been planning to move in together and were very much in love.

Five of Pistorius’s closest neighbours, in contrast, testified last week they had only heard a man crying very loudly as if he was in danger.

One of the neighbours also heard a loud bang and a man crying for help.

The blonde model died in Pistorius’s arms as a result of the bullet wounds she sustained in her hip, arm and head. A bullet had also perforated the webbing between two of the fingers on one of her hands.

He said Steenkamp had eaten her last meal two hours before her death, based on her stomach contents, but two defence witnesses testified that gastric emptying was not an exact science.

Forensic geologist Roger Dixon and private ballistics expert Tom Wolmarans testified for the defence that Reeva had been standing at an angle very near to the toilet door when she was shot in the hip and arm.

Dixon and Wolmarans both contradicted Pistorius’s version that the magazine rack in the toilet had not been near Steenkamp when he found her slumped over the toilet after breaking down the door with a cricket bat.

Although the State accused Pistorius of only caring about himself, lying and deliberately using emotion to create sympathy, social worker Yvette van Schalkwyk testified she had experienced Pistorius as a broken man who was genuinely grieving about the death of a loved one.

She said Pistorius had told her he missed Steenkamp and shot her by accident, but conceded that he never once said he was sorry that he had shot her.

Judge Thokozile Masipa will have to determine if the State has proved the charge of murder beyond a reasonable doubt or if Pistorius’s version could be reasonably possibly true.