ANC stalwarts: Zuma must step down to avoid two centres of power

The stalwarts are asking President Zuma to immediately step down in order to avoid a two center power battle between him and Ramaphosa. 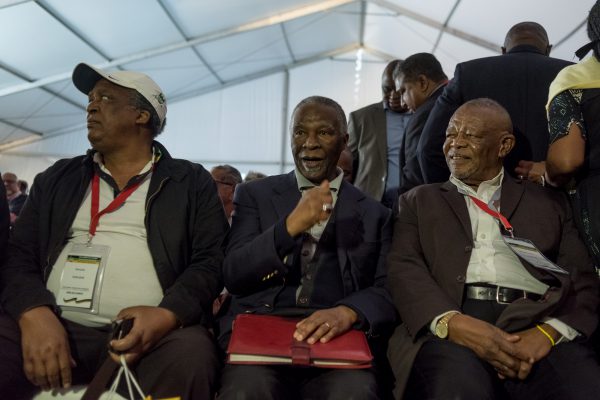 Former President Thabo Mbeki sits before speeches at the National Consultative Conference of the Stalwarts and Veterans of the ANC at Constitution Hill on 17 November 2017. The conference focused squarely on challenges facing the country and party regarding state capture and corruption. Picture: Yeshiel Panchia

Just after a few hours after it emerged that President Jacob Zuma has once again approached the North Gauteng High Court to challenge state capture report, ANC stalwarts have come out guns blazing against the former ANC president.

Spokesperson for the ANC stalwarts, Murphy Morobe said that as Zuma himself pointed out that ‘two centres of power’ is an untenable situation, he should show leadership and step down from his position to avoid a power paralysis.

It is not the first time that the stalwarts are calling for Zuma to step down. They asked him to do so when the Adv Thuli Madonsela released her ‘state of capture’ report and again this year before he effected his last Cabinet reshuffle.

During his political report to the ANC National Conference in Nasrec this past weekend, the outgoing president of the ANC laid into the stalwarts and said they are part of the problem and not strategically advising the ruling party.

He said that he looks forward to joining this structure as soon as his term of office as the head of the state wraps up. He said the stalwarts should use internal processes of the ANC to dispense counsel to the organisation, something he accused them of being unable to do due to their dormant nature as a structure of the ANC.

The stalwarts as well as Ahmed Kathrada Foundation shot back at Zuma for criticising them, and charged that he was obfuscating the debate as they have done precisely what he was accusing them of failing to have to fulfill.