The Elder Scrolls Online (from here on referred to as TESO) is the latest in the Elder Scrolls series, a departure from the dense single-player experiences it’s offered in instalments past.

In moving online, it tries to be more than the sum of its parts: attempting to replicate the freedom and narrative of its forebears while seamlessly blending in the more social and group-orientated activities that keep MMO players coming back.

Reviewing an MMO is a tricky proposition, especially in the case of one with a monthly subscription fee. Does the game hold out over the long-term for MMO fans? Can it cater for solo players — who don’t necessarily have the time to dedicate to longer raids or quests — and provide an enjoyable single-player RPG? And does it uphold the Elder Scrolls legacy? 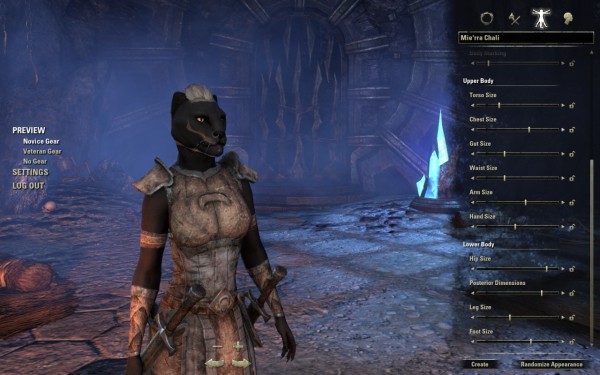 In the interest of providing a more accurate reflection of TESO, I’ll be posting my impressions over the course of my time with the game. This article covers the first 15 character levels, and represents some 50 hours of play-time with ESO thus far.

Creating a character is the first order of business, and you certainly won’t be disappointed. TESO offers a robust character creation tool that allows for a diverse range of body types, facial features and adornments. Character creation is kept lore-friendly, so you won’t see any neon hair options, but overall you should have no problem crafting the character you want.

Probably the most important choice at this stage is which of the three factions you intend to join and your class, as this will determine your starting quest area. To this end, I crafted a Khajiit Nightblade (an assassin class that focuses on dealing massive damage from stealthy attacks, and the closest thing to the traditional thief class from games prior) of the Aldmeri Dominion.

After a less-than-subtle mandatory Elder Scrolls Prison Break™, you’re dropped with very little fanfare into your starting area, and you’ll be immediately impressed with the visual style. While not as striking as its solo siblings, TESO bandies between a variety of locales and flora, intermingling wide-open areas with more claustrophobic ruins and unique set pieces for certain quests and dungeons, and it all feels reasonably cohesive. While slightly let-down by the reuse of certain assets — in particular, duplicated buildings and interiors — the game is legitimately beautiful. 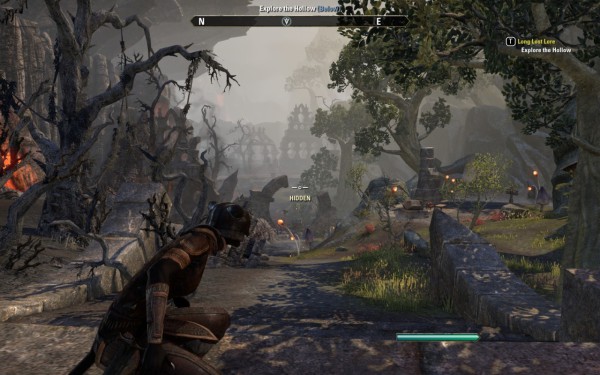 While NPCs have received some flak for seemingly being voiced by the same three voice actors, I found the world of TESO to be a more vibrant place than I’m used to in MMOs. While generally one-line wonders, they give the world a bit of texture, and the quest NPCs offer up intriguing tales for those interested in the history of Elder Scrolls and the lore that intersects across the various provinces of Tamriel.

An extensive collection of books flesh out the world, and the game rewards exploration and deviating from the main quest structure with hidden public dungeons, treasure chests, and other diversions such as fishing and closing dimensional gates — similar to those found in Oblivion — that spawn various demonic beasties. The story I’ve found particularly engaging so far, and it is by far the most critical thing that has kept me playing through the course of my 50 hours.

Regardless of your character class, TESO allows you to develop any skill line – skill levels are independent of your characters level, and will progress with use. So if you’re a mage that wants to duel-wield battleaxes, go for it, although you won’t benefit from your class skills. Character levels bring skill points and attribute points, and I found the initial selection of skills daunting. This wasn’t helped by the randomised item drops that can leave you wanting for certain equipment early on before you have the ability to craft decent weapons and armour that leverage your desired skill set. 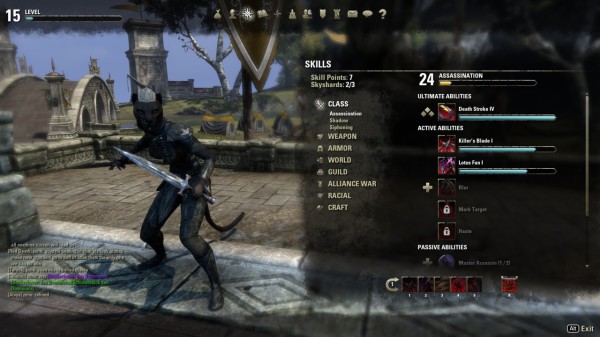 As a result, I’ve put about two or three skill points into skill lines which I’m unlikely to revisit. Fortunately, it’s possible to reallocate all your attribute and skill points once you find the appropriate locations, something I’ve yet to achieve, but it’s comforting to know I can experiment somewhat.

Similarly, if you’re looking for the option to approach TESO in the myriad ways that was possible in the previous iterations, you’re going to be disappointed; regardless of your character, there’s typically only one answer to any quest you undertake, and if you’re hoping to partake in thievery and other less, uh, legal activities, you’ll be disappointed. Bethesda intends to add a Thieves Guild and more diverse options for engaging with the world, so this might change in the course of my next 15 levels or so.

Skills are mostly used in battle, but unfortunately combat feels less dynamic than in other Elder Scrolls entries. This is in part necessitated by the game’s online nature, which needs to compensate for lag and group battles, but even ignoring that the combat feels less than engaging. Combating the various creatures that dot the landscape isn’t much more than an exercise in pressing your ability shortcuts in the correct sequence and looting the subsequent corpses.

Boss fights and quest enemies occasionally offer a little more variety and challenge, but I’ve yet to encounter any real wall to progress. Groups offer more challenge, and without support it’s very easy to come undone, but it’s hardly the norm.
This is both the strength and weakness of TESO: I appreciate the ability to play alone, but the game does little to leverage the online aspect of the game. 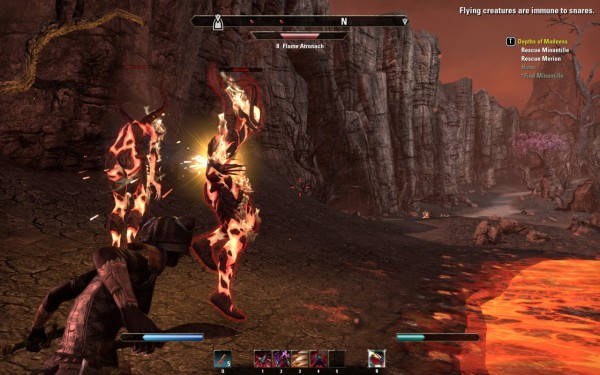 Seeing multiple people performing the same tasks as you and crowding around a particular NPC breaks the immersion of the single-player experience, but currently doesn’t offer a more enticing group alternative. While working in a guild would no doubt help remove the tedium of materials collection and some of the trickier quests, TESO can feel like an empty social experience.

This is less so in the PvP portion of the game, which is sectioned off from the main quest-line and offers an interesting diversion from the story proper. Set in the embattled province of Cyrodiil, TESO sees you striving with the other members of your faction to capture strongholds and the actual Elder Scrolls in an effort to swing the war of Tamriel in your favour. It’s certainly not mandatory, but if you’re going to get the most out of TESO it’s worth visiting.

While Cyrodiil itself is the least-inspired area of the game aesthetically — consisting of large open fields and little else in between the various player strongholds — it does offer some unique mechanics that make the PvP a more thrilling mode. War missions are divided into missions for solo players and group efforts, but you’ll initially have the most fun getting into the thick of sieges. Players earn points that are a form of currency within the PvP area that can be used to buy siege equipment, repair castle walls, purchase superior war equipment and more. 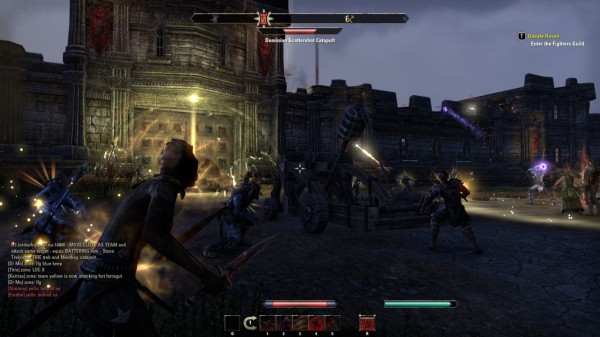 It’s also incredibly tough for under-levelled characters, and you’ll likely want to double on the minimum level 10 required to enter before engaging with any seriousness in the PvP.

TESO is an odd beast. If you’re interested in more Elder Scrolls story goodness and don’t mind watered-down mechanics and systems from the main line of games, it comes across as a bit of Elder Scrolls + MMO Lite. If you have a group of friends or are interested in PvP, the game offers an interesting implementation but makes me wonder how long the interest will last without more diverse modes and options.

If you’re looking for a gentler way to experience MMOs, TESO is a great way to start. Given that the level cap is 50 and supposedly requires in the region of 120-150 hours of game time — combined with a subscription model that’s a little costly in a world of free-to-play alternatives — my recommendation is to wait until you’ve got a solid chunk of free time to explore ESO.