Oscar Pistorius will spend a month as an out-patient at the Weskoppies Hospital, where a panel of three psychiatrists and a psychologist will assess him to determine if he was criminally responsible for his actions when he shot and killed his girlfriend, Reeva Steenkamp. 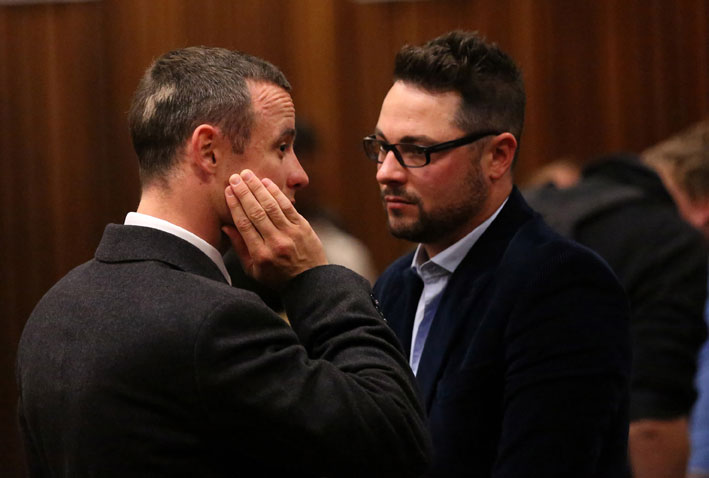 FILE PICTURE: Paralympian and murder-accused Oscar Pistorius (L) gestures as he chats to his brother Carl at the high court in Pretoria on Tuesday, 20 May 2014. Picture: Siphiwe Sibeko/Reuters/Pool

Judge Thokozile Masipa yesterday ordered Pistorius to report as an out-patient at the hospital on Monday, May 26, and thereafter on weekdays for a period of no longer than 30 days.

He will have to report every morning at 9am and will have to remain there until 4pm, or until formally excused by the medical superintendent of the hospital.

The panel of experts will include Leon Fine, a specialist psychiatrist in private practice, Herman Pretorius, the head of the psychiatry department at the Weskoppies Hospital, and Jonathan Scholtz, who heads the clinical psychology department at the hospital.

A third psychiatrist must still be appointed in terms of the Criminal Procedure Act.

Judge Masipa ordered that the team of experts determine if Pistorius suffered from any mental illness of defect which affected his criminal responsibility at the time of the incident and if he was capable of appreciating the wrongfulness of his act – and to act accordingly.

State prosecutor Gerrie Nel applied for the order after defence psychiatrist Merryll Vorster testified that Pistorius suffered from generalised anxiety disorder (GAD) which, coupled with his physical vulnerability, may have affected his ability to act in accordance with his realisation of the wrongfulness of his conduct when he killed Steenkamp on February 14 last year.

Pistorius testified he had fired the shots without thinking, fearing there was an intruder in his toilet and that he and Steenkamp were about to be attacked, but the State alleged he had deliberately shot her after an argument.

Johan Engelbrecht, a former acting judge, said Pistorius could be acquitted if the panel of experts found he was not criminally responsible for his conduct because of a mental illness of defect.