Multichoice at an advanced stage of selecting ANN7 replacement

MultiChoice is looking for an black-owned independent company to operate a uniquely South African channel. 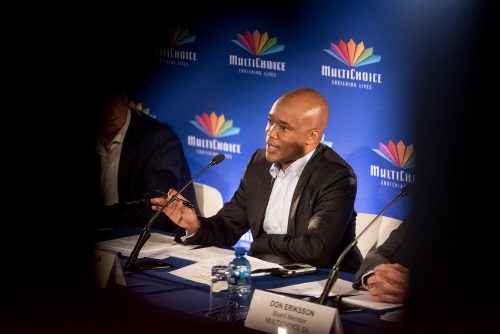 Multichoice CEO Calvo Mawela speaks to the media during a press briefing at Multichoice Headquarters in Randburg, Johannesburg on 31 December 2018. The company gave a press briefing today on the outcomes of the audit of it's relationship with ANN7. Picture: Yeshiel Panchia

The viral social media messages inviting “experienced South African journalists” to run a soon-to-be-launched 24-hour news channel are premature as the process to select a successful bidder by Multichoice continues.

The Citizen can today reveal that between March 12 and 16, 2018, Multichoice is meeting with 16 shortlisted prospective channel operators, which should then lead to the announcement of the successful bidder.

Towards the end of February, the company announced it wanted to launch a uniquely South African, “predominantly English news channel that takes into account the history, diversity of cultural background, languages and socioeconomic circumstances in South Africa”.

The 24-hour news channel will be expected to “provide anchor-based, live broadcasts in the style of Al Jazeera, CNN, Sky News, ENCA, SABC News and others … specially focus on national, regional, local and African news, actuality, current affairs and sport with less focus on international affairs”.

Multichoice categorically stated it should be owned, managed and operated by an independent black-owned company and “focus on training and development of news and broadcast industry personnel”, and will receive funding from Multichoice and “other sources”.

RELATED: Calls mount for MultiChoice to ‘come clean about ANN7’

Multichoice drew flak from the industry and the public earlier this year when it admitted it had paid Gupta-owned ANN7 millions of rands and failed to act on complaints lodged years back about the news station flouting the broadcasting code of conduct.

It announced it would can the contract with ANN7 by August 2018. Current owner and Gupta-linked businessman Mzwanele Manyi said he would be taking Multichoice to court.

A source close to the process claimed Mzwanele Manyi was one of the bidders for the new station through a company called Afrotone. It is not clear whether he made it to the shortlisted group of 16 companies this week.

MultiChoice South Africa has committed to provide The Citizen with a comprehensive response on this issue in due course. Their response will be published as soon as it is received.

In one of the recruitment viral messages doing the rounds last week, applicants were requested to forward their CVs to a company known as ABT Africa. An online search revealed that it is “a company active in the design, manufacture, marketing and installation of electronic home entertainment devices, particularly the set-top boxes and screens. ABT Africa also offer value-add Apps and other down-stream services”.

Showmax originals for 2022: 'Sex in Afrikaans', 'Real Housewives of Lagos' and more
6 days ago
6 days ago
PREMIUM!

Showmax originals for 2022: 'Sex in Afrikaans', 'Real Housewives of Lagos' and more
6 days ago
6 days ago
PREMIUM!