16 Days of Activism campaign is a ‘blame game’

The department called on all to heed the president's call to ensure the two-week campaign became a 365-day campaign. 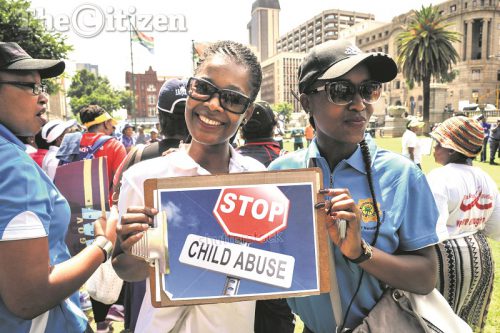 Police officers are seen dancing and singing after their march from the Union Buildings to Church Square, 7 December 2016, as part of the SAPS programme of action for the 16 days of Activism for no Violence Against Woman and Children. Picture: Jacques Nelles

The annual 16 Days of Activism for No Violence Against Women and Children campaign is apparently seen as a period of blaming men, while making boys and men feel left out of the cause.

This was discovered during the nationwide awareness campaign on the scourge of gender-based violence in the country, hosted by the Minister in the Presidency for Women Bathabile Dlamini.

The minister held the Pretoria leg of the campaign yesterday, hosting a men and boys dialogue at the Tshwane Events Centre, where young men expressed themselves on gender-based violence and how to put an end to it.

During the dialogue, boys called on the country to portray positive images of manhood so as have role models to emulate.

Little 12-year-old Tshepo Mafatshe told Dlamini the two week campaigning only portrayed abused women. “We only see images of abused women, but we still do not know what it means to be a good man,” he said.

This showed there was lack of positive role models in society, Dlamini said to the boy. “Government alone cannot provide this. This must come from within communities.”

The dialogue aimed to encourage men and boys to be part of the solution in ending gender-based violence.

The department has spent time in shopping centres, taxi ranks, schools and local churches, engaging community members in parts of the Eastern Cape on how to identify healthy and unhealthy relationships. This included strategising with men on how to combat violence and how to socialise boys and girls into a society free of gender-based violence. “

During our countrywide campaign, we have learnt that many South Africans consider the 16 Days campaign as a time to lay blame in the hands of men,” Dlamini said. “Nothing can be further from the truth. Men and boys are critical to the cause of ending gender-based violence.”

As the two-week campaign draws to an end, the department called on all to heed the call of President Cyril Ramaphosa during the gender-based violence summit to ensure the campaign became a 365-day campaign.

The Boity-Bujy altercation must be labelled correctly
3 days ago
3 days ago
PREMIUM!

Polygamy: Women should be freed from chains of abuse disguised as Culture
3 weeks ago
3 weeks ago
PREMIUM!

The Boity-Bujy altercation must be labelled correctly
3 days ago
3 days ago
PREMIUM!

Polygamy: Women should be freed from chains of abuse disguised as Culture
3 weeks ago
3 weeks ago
PREMIUM!