Why Zuma’s Twitter arrival was a moment to remember 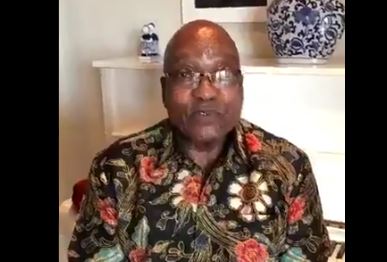 Screengrab from a video on Jacob Zuma's Twitter page.

A day after a serious court setback that will compel him to shoulder millions of rands in legal fees, a jovial former president Jacob Zuma announced yesterday that he was joining Twitter – but he promptly distanced himself from supposed fundraising efforts on his behalf.

Zuma, who was told by the High Court in Pretoria on Thursday that he would have to settle legal fees for his criminal and civil cases from his own pocket, made his Twitter debut with a 45 second video of himself informing users that he had decided to join in on the national debates in cyberspace.

“I have decided to move with times to join this important area of conversation because I hear that many people are talking about me, as well as others are calling themselves Zuma in many ways,” said the former president, who was forced to step down and was replaced by Cyril Ramaphosa in February.

“I felt it is necessary that I should join in and be part of the conversation and join the people in their discussions. It’s me, former president Jacob Zuma,” he added, before signing out with a smile.

Zuma’s Twitter account, @PresJGZuma, which was set up last month according to his profile, had roughly 300 followers until yesterday morning when these ballooned to thousands after he posted the video. By 12.16pm it boasted 24 200 followers. It just kept attracting more.

#JacobZuma This guy is going to break Twitter. He's heading to 50k followers in a single day

Twitter users appeared to embrace Zuma’s presence in cyberspace despite his widespread vilification in real life, amid allegations of corruption and misgoverning the country.

Even his arch opponent, leader of the Economic Freedom Fighters Julius Malema, tweeted “Welcome Baba” in response to Zuma’s post.

Zuma has so far not followed anyone, including President Cyril Ramaphosa, who has a verified Twitter account. Nor has he followed his own ruling party.

In his second tweet, Zuma addressed a user who posted what purported to be the banking details of a fundraising effort to pay for Zuma’s legal fees. “This is false,” Zuma posted.

'The Wife' reactions: 'Hlomu does not know how to see a red flag'
8 hours ago
8 hours ago

'The Wife' reactions: 'Hlomu does not know how to see a red flag'
8 hours ago
8 hours ago