The ZACube-2 took off from Russian Vostochny spaceport yesterday, along with the Russian Soyuz Kanopus mission and other small satellites. 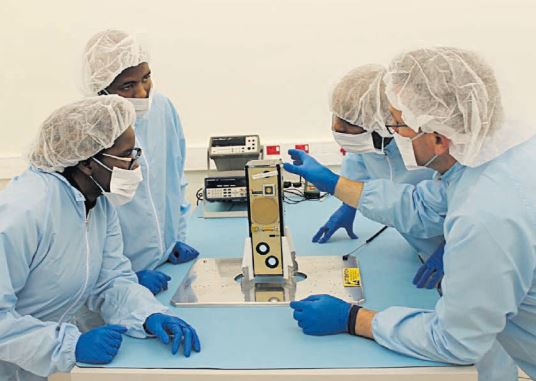 ZACube-2 has been developed by some of SA’s youngest and brightest minds under a programme representing diversity, says Science and Technology Minister Mmamoloko Kubayi-Ngubane. Picture: Supplied

In a milestone for South African science and technology, the country’s most advanced nanosatellite was launched into space from Russia yesterday.

It will provide cutting-edge remote sensing and communication services to the country.

The ZACube-2 took off from Russian Vostochny spaceport, along with the Russian Soyuz Kanopus mission and small satellites from the US, Japan, Spain and Germany just after 4am.

Weighing just 4kg, the satellite was designed for real-time monitoring of natural and man-made emergencies.

Science and Technology Minister Mmamoloko Kubayi-Ngubane said: “This satellite will help us monitor our ocean traffic as part of our oceans economy and also monitor veld fires and provide near real-time fire information ensuring a quick response time by disaster management teams.

“Science is, indeed, helping us resolve the challenges of our society. I want to congratulate our space team for great work and this achievement.”

The science and technology department invested R16.5 million at the Cape Peninsula University of Technology (Cput) in the project, which was managed by the South African National Space Agency (Sansa), France’s University of Montpellier, the French Embassy and the Paris Chamber of Commerce.

The ZACube-2 is South Africa’s second nanosatellite to be launched and is three times bigger than its predecessor, TshepisoSat. It is the continent’s most advanced cube satellite.

In April, Kubayi-Ngubane attended the send-off ceremony and met the young team that worked on the satellite at Cput.

It was scheduled to be launched from India in June, but an alternative arrangement was made due to excess capacity on India’s Polar Satellite Launch vehicle.

“I am particularly excited that the satellite was developed by some of our youngest and brightest minds under a programme representing our diversity, in particular, black students and young women,” the minister said.

The ZACube-2 will be given a new name after the launch of a national satellite-naming competition in April. More than 300 entries were received from pupils from Grades 4 to 12.