Matric results day should be postponed for quality – Umalusi

Meanwhile, it was the first time in five years that no paper was leaked during the national senior certificate exams. 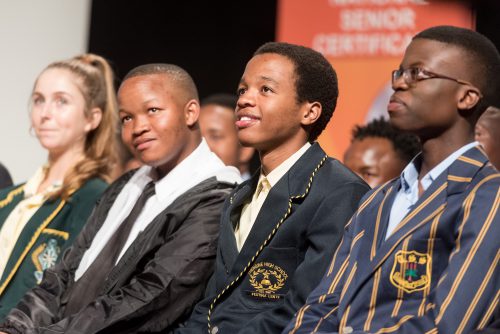 Top learners from around the country sit in front of a banner during the Announcement of the Matric Results for the Class of 2017 at the SABC studios in Auckland Park, Johannesburg on 4 January 2017. Picture: Yeshiel Panchia

Umalusi, the Council for Quality Assurance in General and Further Education and Training, has appealed to all education stakeholders to push back the release of matric results in future, as the date set in the first week of January placed pressure on the process of quality assurance.

The council announced yesterday that the 2018 national examination results were approved for release on January 3.

Umalusi chairperson John Volmink said they were pleased that apart from a few instances of irregularities, such as a school principal in Gauteng giving answers to a geography paper 1 exam, there were no systematic irregularities reported that would compromise the overall integrity and credibility of the 2018 national examinations.

The same applied to the IEB exams, which were commended for successfully conducting “credible examination”.

“There is no serious irregularity that has not caught the attention of Umalusi and the DBE to undermine the integrity of the examination process.

“After each exam, Umalusi provides assessment bodies with detailed technical reports to highlight areas of concern and recommendations for improvement.”

But the quality assurance council has appealed to relevant stakeholders such as the DBE, IEB, the SA Comprehensive Assessment Institute, Benchmark Assessment Agency and the department of higher education and training to push back the date of releasing the matric results as it adds pressure on ensuring quality assurance, Umalusi CEO Mafu Ramoketsi said.

“Umalusi makes an appeal … to reconsider timing of the release of results. It is our view that releasing results in the first week of January places tremendous pressure on the process, including Umalusi’s quality assurance process. Umalusi works under pressure to complete their work in time each year,” he said.

But that was something all stakeholders, including the education department, still need to respond to, DBE national spokesperson Elijah Mhlanga told The Citizen.

Meanwhile, it was the first time in five years that no paper was leaked during the national senior certificate exams, while all irregularities experienced in various provinces were resolved.

In Gauteng, the principal of Mpontsheng Secondary School (which ironically means “show me” in English), allegedly gave answers to pupils during their geography paper 1 exam.

In the Eastern Cape, an English home language and English first additional language paper 1 were disrupted by protests by candidates.

But the DBE had no issues to deal with in 2018, Mhlanga said.

“Each year, we have had to deal with these issues until 2018, when there wasn’t a single incident of exam paper leak.

“You can say it is the first time in five years that there’s no paper leaking during exams.”