Rescued flamingo chicks will soon be reunited with their feathery friends

The Kamfers Dam has been deemed stable and thus safe to house the rehabilitated chicks. 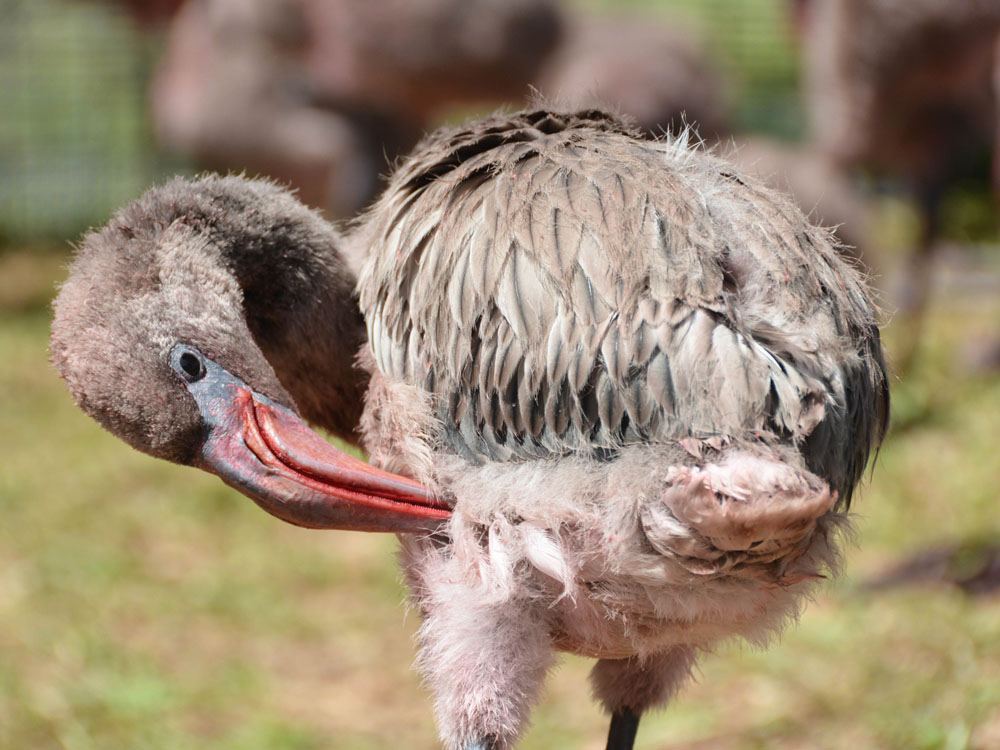 One of the rescued Lesser flamingo chicks at SAAMBR in KZN. Image: SAAMBR website

The dramatic rescue of 1,000 Lesser flamingo chicks in January has finally reaped the desired rewards, with the scheduled release of the first batch of chicks, now rehabilitated, set to take place next week.

Tania and Mark Anderson of BirdLife South Africa have confirmed that the dam is currently very suitable for flamingos, with sufficient water levels and an abundance of blue-green algae. There are currently over 10,000 adults and 5,000 chicks or juveniles residing at the dam.

Green algae on the surface of the Kamfers Dam. Image: Save the Flamingo Facebook page

Infrastructure repairs to the Homevale sewage treatment plant are also set to be completed in early May, which will ensure that sewage inflow is constant. They also explained that if algae levels were to drop in late winter, as is often the case, the juvenile flamingos will be able to fly to other wetlands across southern Africa.

“They are not permanently dependent on Kamfers Dam, Lesser flamingos move very extensively in southern Africa,” they said in a post on the Save the Flamingo Facebook page.

Releasing the chicks has been a contentious issue among those involved in the rescue of the chicks, but experts agree that in order to give the chicks the best chance of being integrated with crèches of juveniles, they must be released as soon as possible, and must have as little human contact as possible.

This will also give them the opportunity to “learn flock social life” and bond with their peers.

This behaviour is reportedly being adopted by more of the chicks that were rescued and rehabilitated at uShaka Marine World, thanks to the South African Association for Marine Biological Research (SAAMBR).

Their latest progress report indicates that flocking behaviour can be observed as more chicks are starting to group themselves together and mimic each other’s behaviour. This, SAAMBR said, is essential for their survival, as they are safer when feeding in large groups, as their heads are partly submerged.

Some chicks have not yet fully mastered the preening technique, which involves spreading oil from their glands to their feathers to waterproof themselves, but this will come in time, SAAMBR explained. Some are even resting on one leg already.

Before the chicks are officially released at the dam, they will be screened for diseases and quarantined to acclimatise to Kimberley’s climate. During this time, they will be able to imprint on each other, and not humans. 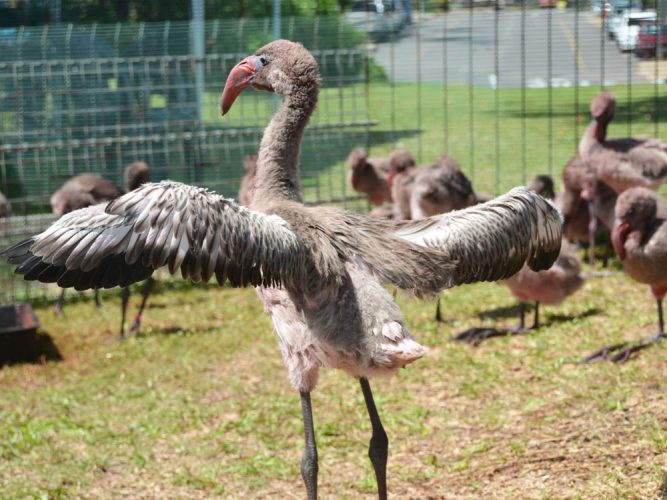 To try and prevent another rescue of this scale, Tania said that the next breeding season will be monitored until a fence is built around the southern side of the Kamfers Dam, or until flamingos begin to breed on the “safe” side of the dam. This refers to the area of the dam where people and dogs do not have access. And if need be, funds used to rehabilitate the chicks can be used to deploy security guards to ensure that no one has access to the side of the dam where the flamingos breed, she said.

Two-hundred chicks are set to be flown to Kimberley next week, to be quarantined and eventually released.