It's safe to say the Sharks and Springbok flyer isn't going to be caught out by complacency anytime soon. 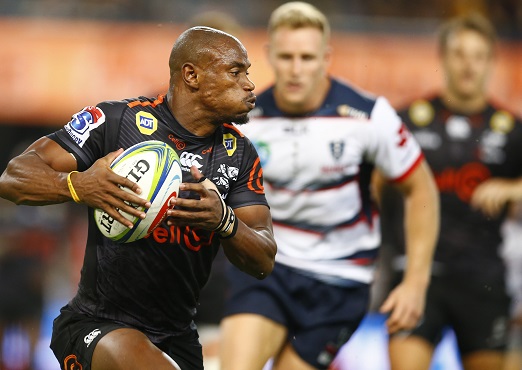 It says much about the class of Makazole Mapimpi that he actually refutes most of the positive things others perceive about his play.

Best wing in the country at the moment? I haven’t even played in the position for two years straight yet.

Rapidly becoming a trump card for the World Cup? I don’t think much about it.

Injury cruelly cut short a promising season in 2018? I thought 2018 actually wasn’t a particularly good year for me.

Those answers may strike one as odd, but Mapimpi is actually right.

The 28-year-old Sharks sensation has only really returned to his best form this year after bursting onto the scene two years ago.

In fact, that “burst” probably comes closer to a Big Bang – a year where he scored an unbelievable 28 tries spread over three tournaments varied in their demands.

There was the 11 for the Southern Kings in their Super Rugby swansong; seven in the Currie Cup for Free State and ten (in just 13 appearances) for the Cheetahs in a gritty first campaign of Pro14 rugby.

Yet even though Mapimpi still managed four tries in his maiden season for the Sharks, as well as receiving a glowing endorsement of his work ethic from Bok coach Rassie Erasmus, some proper introspection will reveal he didn’t quite reach heady heights.

“2017 was as very big year for me, with a lot of rugby for the Kings and the Cheetahs,” said Mapimpi.

“I feel I came into 2018 tired and that maybe was why my form was not as it should have been.”

A season-ending injury proved a blessing as Mapimpi has soared again.

He has already equalled his try tally from last season, while also boasting 13 clean breaks and a eye-catching 447m running metres to date.

Typically, the man from Mdantsane believes he still has a lot more to give despite his cracking form.

“I was playing centre when I was at Border back home and I didn’t play on the wing,” he said.

“I need to improve under high balls and with my tackling technique. I wasn’t good under the high ball when I was with the Boks in camp and coach Rassie spoke to me about it, so I started fixing it.”

Erasmus has undoubtedly been watching, but World Cup ambitions are on the backburner for Mapimpi.

“I’m not thinking about the World Cup‚ even though I’d love to go‚ but I’m focussing on my game at the moment. I have to improve in each game.”