The defending champions run rampant as they exploit a home side that simply looked out of their depth. 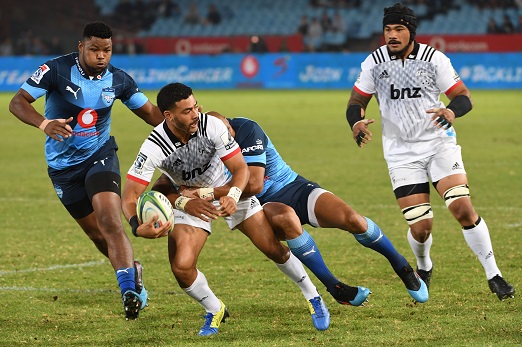 Richie Mo’unga of the Crusaders tackled by Cornal Hendricks of the Bulls during the Super Rugby match between Vodacom Bulls and Crusaders at Loftus Versfeld on May 10, 2019 in Pretoria, South Africa. (Photo by Lee Warren/Gallo Images)

Should the Bulls hierarchy asks its fans why they need to provide 12 000 discounted tickets for a decent crowd to turn up at Loftus, those supporters will point to this.

The Bulls were comprehensively outplayed at home for a second time this season, slumping to a 13-45 loss to a rampant Crusaders on Friday night.

Winning rugby and teams bring souls to a stadium and the home side remains far too inconsistent to garner such loyalty.

The Crusaders were compelling – even if they weren’t quite at their best – in torturing a poor Bulls defence to kick of their SA safari in ideal fashion.

Crusaders flyhalf Richie Mo’unga was simply outstanding as the man pulling the strings for the defending champions. He showcased his nifty footwork and attacking ability in scoring his brace in the first half, the second a brilliant piece of skill. But it was really his kicking from hand that stood out. Not only did he gain territory effectively, the two pinpoint cross-kicks within seconds that led to wing Sevu Reece’s hat-trick were simply breathtaking.