Why the DA isn’t celebrating its 60th birthday

Despite its endurance, the DA still hasn’t found a firm foothold to grow its votes in South Africa’s changing political landscape. 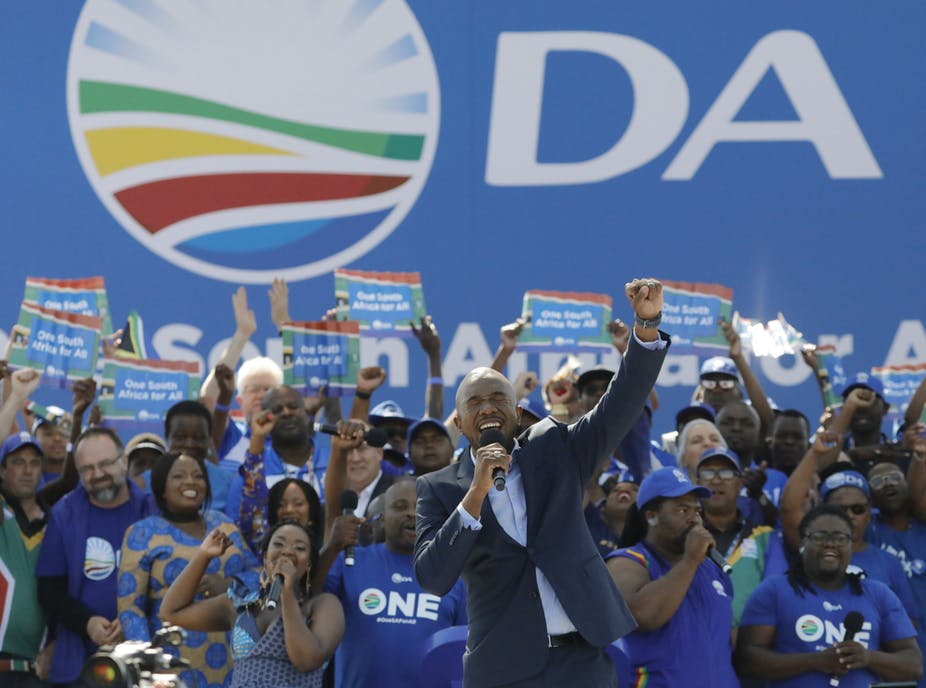 The Democratic Alliance has transformed itself from an overwhelmingly white party to a majority black party. Picture: EFE-EPA / Kim Ludbrook

At the one extreme, South Africa’s governing party, the African National Congress (ANC), celebrates every possible historic anniversary of its life and struggles. At the opposite extreme, the main opposition Democratic Alliance (DA) has so far not said one word that 2019 marks its diamond jubilee – its 60th anniversary.

The DA was founded in 1959 by 12 MPS as a breakaway from the now deceased United Party. One of them was Helen Suzman, who became world famous for opposing apartheid, maximising the opportunities offered by Parliamentary question time. Its first name was the Progressive Party – one of five names it would call itself over the next six decades.

The DA has risen to become the official opposition. Following recent elections in the country it has 84 members of Parliament.

The DA seems to be the eighth-longest surviving party in Africa. It is a respected member of both the Liberal International and the African Liberal Network.

The DA has spent the last 60 years in opposition nationally. But it’s gained a toehold in local and provincial government. It has governed the Western Cape province for a decade, the City of Cape Town for 13 years, and more recently Tshwane, Johannesburg and Midvaal in Gauteng, the country’s economic hub, among other cities.

This remarkable history merits a snapshot. The DA is the only party from the apartheid parliament to survive – and indeed flourish – in the democratic parliament since 1994. Alongside the South African Communist Party, and the now deceased Liberal Party of South Africa, it is the only party to transform itself from an overwhelmingly white party into a majority black party.

After it was launched as the Progressive Party in 1959, the architect of apartheid and then Prime Minister Hendrik Verwoerd , called an early whites-only election in 1961. Only Helen Suzman retained her seat.

The “Progs”, as everyone called them, also included a few Coloured members since they were founded. (“Coloureds” is an apartheid-era term for mixed-race persons, plus Khoisan descendants). This so enraged the apartheid government that it passed the Prohibition of Political Interference Act in 1968, which forced parties to be segregated. The Liberal Party dissolved; the Progs’ few Coloured members resigned. When the law was repealed in 1985, some rejoined.

In 1974 the Progs won six seats in Parliament, changed their name in 1975 to the Progressive Reform Party, then to the Progressive Federal Party in 1977. In that year they also modernised their policy to advocate universal franchise and went on to win seats in Parliament. They became the official opposition until 1987, when the racist Konservatiewe Party (to the right of the apartheid regime) overtook them in numbers of MPs.

In 1989 the Progressive Federal Party changed its name to the Democratic Party.

Throughout these decades Suzman used Parliament to relentlessly expose the atrocities of apartheid, and did whatever she could to ameliorate the plight of political prisoners from the African National Congress (ANC), the Pan Africanist Congress(PAC), Liberal Party, and Azanian People’s Organisation (Azapo).

During the Convention for a Democratic South Africa (Codesa) negotiations to establish democracy, which started in December 1991, the party played an important role in ensuring that the rule of law, human rights, and other democratic prerequisites were entrenched in the country’s new constitution.

The party again increased its votes under Tony Leon’s leadership to become the official opposition in 1999. In 2003 it adopted its fifth name, the Democratic Alliance, or DA.

In 2007 the DA negotiated a coalition that replaced the ANC in governing the City of Cape Town. In the general 2009 elections the party won the Western Cape province. In 2016, it negotiated a tactical voting alliance with the Economic Freedom Fighters (EFF) which enabled it to appoint the mayors of Tshwane (the executive capital) and Johannesburg, the largest city.

The DA won 20.8% of the 2019 general election – a 2 percentage point drop compared with the last national poll. It has been allocated 84 seats in Parliament’s National Assembly. The provincial election result saw it retain control of the Western Cape province.

Over the last decade the party has transformed its leadership and elected representatives that are a much better reflection of the country’s demographic make up.

In policy terms the DA is a mix of liberal and social democratic. On the one hand, it has a reputation as being anti trade unions and its 2019 election manifesto effectively called for halving sectoral minimum wages.

On the other hand, it has proposed leaving social grants in place as well as doubling the child care grant to R800 a month. It claims its research indicates that mothers with child grants have a better record of getting jobs than those without. It also proposes paid state internships for unemployed school-leavers.

Like all modern political parties, the DA has a youth wing, DAY, and a womens’ wing, DAWN.

The DA’s drop in the latest election suggests it has lost some Afrikaner voters to the Vryheid Front Plus, a party on the right of the political spectrum which totally opposes land expropriation without compensation, and fights for “the white and coloured victims of affirmative action”.

Under apartheid, the party’s racist opponents jeered that the acronym PFP stood for “Packing for Perth” when many white South Africans emigrated to Australia. The DA turned that on its head by founding DA Abroad to enrol members among South Africa’s diaspora.

But despite its endurance, the DA still hasn’t found a firm foothold to grow its votes in South Africa’s changing political landscape.