Coal mining definitely not on its way out

China is siphoning most of the world’s coal, which will remain the case for much of the next decade, but coal’s future in South Africa will depend on its embrace of clean coal technologies. The idea that coal mining is a sunset industry was put to rest at the Coal Industry Day in Johannesburg this week.

Coal’s outsized contribution to mining and the energy grid cannot be wished away, no matter how many wind turbines are erected in honour of environmental correctness.

Xavier Prévost, senior coal analyst at XMP Consulting, ran through the numbers and it’s clear coal will be here for a long time yet. Coal is found in 70 countries and mined in 50 of them. At current rates of consumption, the International Energy Agency forecasts that coal will last another 114 years, compared to 53 years for gas and 51 years for oil.

China is siphoning most of the world’s coal, and this will remain the case for much of the next decade. Coal-fired power plants will provide roughly half of the energy requirements of South East Asia up to 2040, with most of the rest coming from gas and renewables.

The UK plans to exit coal power generation by 2025, and has reduced coal’s contribution to its energy grid to 5% from 40% six years ago.

Coal is arguably the most transformed sector within mining, and that in itself wins it a receptive ear from policymakers. Last year, Anglo American sold its three Eskom-tied mines (Kriel, New Denmark and New Vaal) to BEE company Seriti.

Another company exiting thermal coal is South32, which has set up a 27.5 million tons a year coal business as a standalone entity. What’s driving this disinvestment is Eskom’s requirement that coal suppliers be 51% black empowered. South32 CEO Graham Kerr says Eskom’s stiff BEE requirements would leave it a minority participant in its mines, which prompted the disinvestment.

“The withdrawal of the majors from coal has opened up opportunities for BEE companies.

“It is also a way to empower workers and communities,” said Sakhile Ngcobo, director at Sibambene Coal.

New entrants to the coal sector include Black Royalty Minerals, which went from start-up to producing 200 000 tons a month, and Sibambene Coal, which is on the hunt for coal assets and aims to be the country’s largest coal group.

One of the concerns for domestic coal producers is the financial and operational mess at Eskom, the largest buyer of coal in SA. The state of the country’s ports and transport infrastructure is another risk. “I hope Eskom gets its house in order for the sake of SA,” said Ndavhe Mareda, CEO of Black Royalty Minerals. Steam coal prices have been all over the place in the last year, another risk facing miners. Prices veered between US$50 and US$100 a ton, with the trend towards the downside for much of this year. However, recent shipments from Richards Bay are priced at around US$65 per ton.

Prices are likely to remain volatile, with some futures contracts locking in at US$70 per ton. One reason for the recent spike in futures prices is summer demand from Japan, the world’s third-largest importer after China and India, and new import restrictions in China. A surge in power demand has prompted China to restart coal-fired generation that had earlier been shelved.

Coal producers also identify environmental pressure groups as a clear threat, but this may be over-stated.

A University of Chicago study found that solar panels and wind turbines are making electricity significantly more expensive – by 17%, 12 years after the adoption of Renewable Portfolio Standards in the US. This cost consumers in 29 US states US$125.2 billion more for electricity than would have been the case in the absence of the policy. This is because power utilities have to fire up natural gas and hydroelectric plants when the wind stops blowing and the sun stops shining.

A second poll asked whether the newly introduced carbon tax was a positive step forward for SA. This time the result was a bit more equal: 60% voted in favour of the tax, which is small enough not to trouble most miners, but could easily be ramped up in later years.

Swanepoel urged those who are climate doubters to take a hard look at the science, which was clearly settled in favour of man-made climate change. But, as one delegate pointed out, the real question is whether this was catastrophic, not whether man was increasing CO2 emissions. 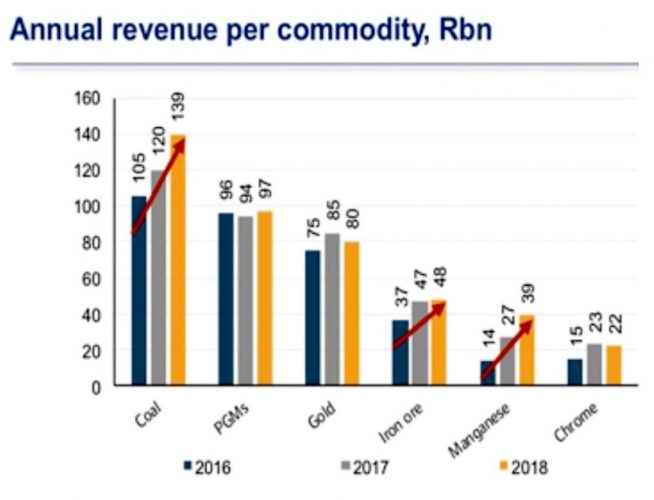 For policymakers, the debate is certainly settled. Coal’s future in SA will depend on its embrace of clean coal technologies. “Deploying high efficiency, low emission [HELE] coal-fired power plants is a key first step along a pathway to near-zero emissions from coal. HELE technologies are commercially available now and, if deployed, will reduce greenhouse gas emissions from the entire power sector by around 20%,” said Prévost.

Improving efficiency increases the amount of energy that can be extracted from a single unit of coal. A one percentage point improvement in the efficiency of a conventional pulverised coal combustion plant results in a 2-3% reduction in CO2emissions.

The future of coal is secure. “Although there are other many other sources of energy in the country, they will never be able to compete with coal in price and reliability of supply,” said Prévost.