Male eagle Thulane disappeared in June, but a new male may soon take over duties as Makatsa's chick matures. 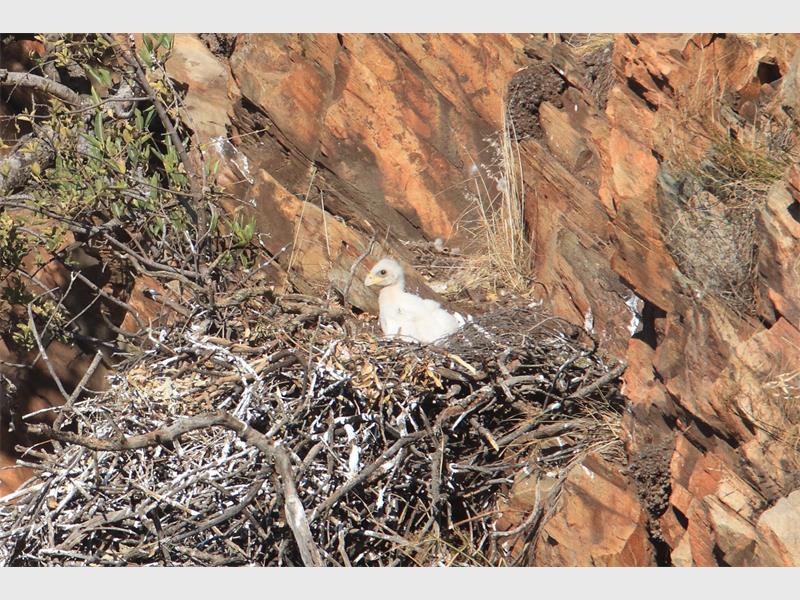 The Black Eagle Project Roodekrans (BEPR) has witnessed some unexpected and rather exciting events in the past weeks, since the disappearance of male eagle Thulane, reports Roodepoort Northsider.

Thulane was last seen by project monitors on June 8, and despite extensive searching and following up on reports from the public, he has never been found.

BEPR Chairman Gerald Draper said, “Speculation has been rife, but the simple answer is that we do not know what happened to him”.

On June 12, photographic evidence confirmed two eggs on the nest, and the presence of one chick was confirmed. Later, it was confirmed that neither the second egg nor a second eaglet were present.

The female eagle, Makatsa, has been feeding the chick since the hatching, and has impressed everybody with her drive and tenacity.

Gerald said, “Should everything proceed normally, we can expect fledging between the middle and end of September.

The ongoing efforts of the Sugarbush Ridges Coalition and Volunteer Rangers, who have destroyed hundreds of snares in the area, have led to the habitat being more stable, and as a result there is sufficient prey and Makatsa does not have to venture too far in pursuit of food.

Last Saturday afternoon, two adult eagles were seen flying in the Walter Sisulu Botanical Garden. These were confirmed as being Makatsa and a new, younger, male bird.

Various raptor specialists felt that it was possible that Makatsa would continue raising the chick, and that her maternal instincts would make her protect it from any harm.

Gerald said, “This appears to be the case at present, and we are curious to see what role the male will play in the next few months.”

The new male has not yet been named, although the Botanical Garden’s staff have been asked to submit their suggestions, and hopefully he will be named by the end of this month.

Roodepoort Northsider’s ‘Name the Chick’ competition, during which the public will be invited to suggest a name, as has been done over the past few years, will go ahead towards the end of August.

Habitat protection and stability remains the single most important factor in ensuring a healthy biodiversity. Any donations to assist will be most welcome and can be deposited into the BEPR’s bank account, as follows:

BEPR has requested that donors emailing a deposit slip/proof of payment to info@blackeagles.co.za so that they can acknowledge the support.