The university's priorities now is the students' safety and to find alternative accommodation. 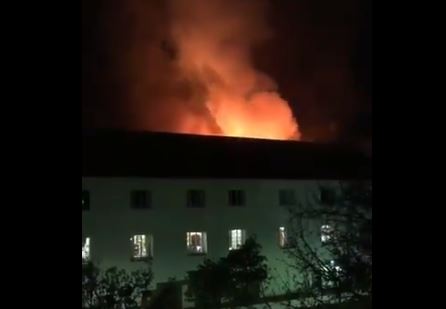 One person was treated for burn wounds after a fire broke out at Stellenbosch University’s women’s residence on Monday night, university spokesperson Martin Viljoen said.

“The fire in the Huis Ten Bosch residence for women on the Stellenbosch University campus has been brought under control and as far as can be determined, all residents have been brought to safety,” added Viljoen.

“One student was treated for burn wounds.”

The cause of the fire, which was extinguished by 20.30pm, is unknown.

Afterwards, the 164 students, who were evacuated from the residence, gathered at the Wilgenhof residence and were addressed by De Villiers.

Viljoen said the university’s priorities now was the students’ safety and to find alternative accommodation.

However, other residences and Stellenbosch’s student community quickly sprung into action and made alternate arrangements for the women.

Counselling and support services were also in place.

The Centre for Student Counselling and Development’s 24-hour crisis service, in collaboration with ER24, has been activated and can be contacted at 010 205 3032.

“My understanding is that eight rooms on the top floor of the residence were damaged,” said Viljoen.

The primaria at Huis ten Bosch, Nikita Köhler, said everybody was safe.

“We have all been evacuated, everyone is safe,” she added.

The women at Huis ten Bosch refer to themselves as “Women of Fire” after a fire broke out in the residence in 1983.

Viljoen said the extent of their losses, such as textbooks, was not known yet.

In 2007, law student Izak Potgieter was seriously injured when a fire broke out at the Eendrag residence. He had reportedly jumped out of a third floor window to escape the flames.