The City of Johannesburg has drafted a rough policy that will see victims of natural disasters in the city receive temporary emergency accommodation (TEA). 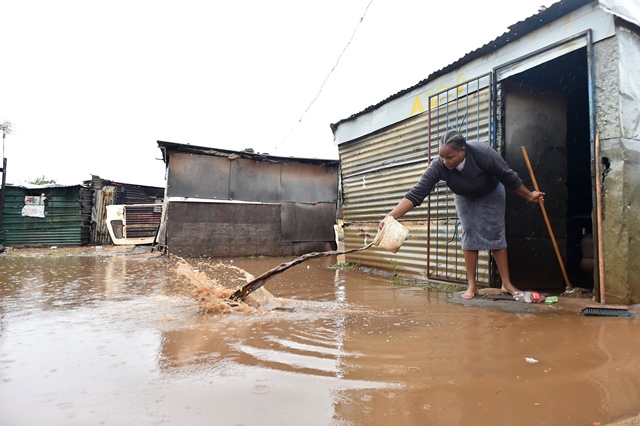 Siphelele Xalaza, a resident of Mpilisweni informal settlement in Thokoza, throws out water after cleaning her shack, Xalaza's shack started flooding on Friday but failed to keep the amount of water that was entering her place. Picture: Itumeleng Eenglish/African News Agency(ANA)

“The primary purpose of this policy is to address emergency housing assistance on a temporary basis.

The City has previously dealt with emergency housing through the Emergency Management Services (EMS) Department, with victims of natural disasters being provided temporary housing in the form of tents, or accommodation in community centres.

“Often these affected persons remain homeless temporarily or indefinitely after having received some form of initial assistance from EMS and are required to be accommodated.

“These affected persons then become the prerogative of the [Department of Human Settlements],” the City said.

“The City, however, wants to clarify that the policy should not be mistaken for or interpreted as a tool to encourage influx control in and around the inner city of Johannesburg or seen to be promoting the unlawful occupation of land.”

The policy will apply to the following: Households whose monthly income is below R 3 500;Minor-headed households;Elderly persons;Persons without dependents;Persons who do not own any immovable property in the Republic, and;Persons who have not previously received assistance.

Undocumented foreign nationals and/or prohibited persons, as defined by the Immigration Act (No. 13 of 2002), would be assisted, but dealt with in consultation with the Department of Home Affairs.

The temporary housing would be provided for a period not exceeding six months, the City said.

This period is also subject to being reduced pending evaluations or other such conditions that may require an affected person to be relocated or removed from the TEA building.

The six-month period could be extended, but this would be at the City’s discretion, and would be accompanied by an exit strategy to ensure the accommodated households are able to exit within the specified time.

“The CoJ will ensure that the TEA building or TRA (temporary relocation area) conforms to the applicable legal norms and standards,” the document reads.

The TEA policy, along with the allocations policy and the serviced sites policy had gone through the public participation process and was expected to be tabled at council in the next coming months, the statement says.