The driver of the truck was ejected on impact after being involved in a collision with a bakkie and a car, and sustained serious injuries. The truck came to rest upside down in a stream. Image: Arrive Alive

A truck driver sustained serious injuries when he was ejected from the truck he was driving during a collision on Lois Avenue in Gleneagles, Johannesburg, on Monday.

According to Netcare 911 spokesperson Shawn Herbst, paramedics responded to reports of the accident at around 12:16.

“Reports from the scene indicate that a truck, bakkie and car were involved in a collision resulting in the truck and bakkie leaving the road,” Herbst said in a statement. 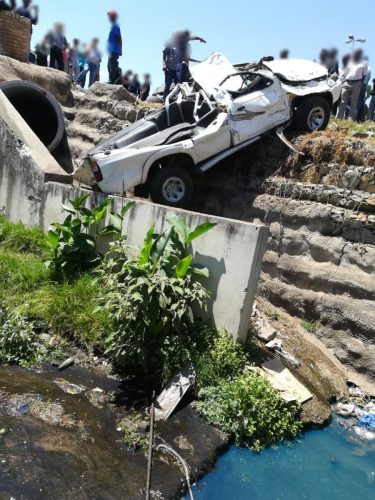 The scene of the crash. Image: Arrive Alive

The truck came to rest upside down in a stream.

“Medics assessed the scene and found that the driver of the truck was ejected on impact and was found to have sustained serious injuries.

“He was treated on scene by an advanced life support paramedic and once stabilised was transported by ambulance to hospital,” Herbst said.

Three other patients sustained minor to moderate injuries and were treated on scene before being transported by various ambulance services to hospital for further treatment.

All necessary authorities were on scene, Herbst said.