‘Look around you, everybody is united’ – Overjoyed SA fans react to Springboks’ World Cup triumph

Supporters packed out Zwide Stadium, the former training ground of Siya Kolisi, to watch him lift the trophy all these years later. 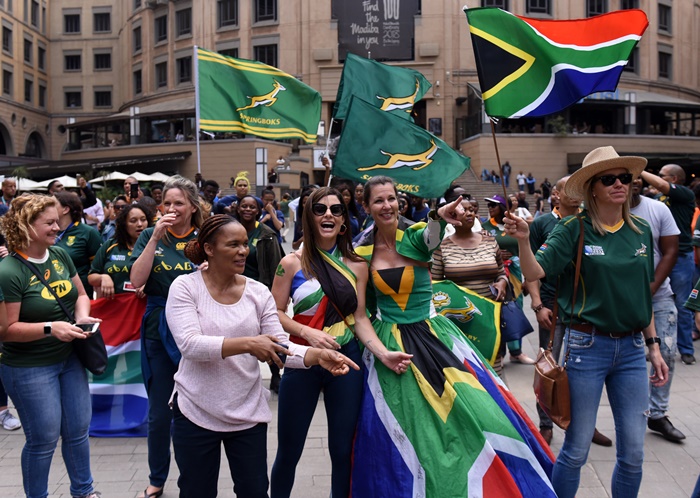 “You know the hashtag #StandTogether? Well this is exactly it means!”

This was the view of one ecstatic Springbok fan moments after South Africa beat England in the Rugby World Cup final on Saturday to be crowned world champions.

Cape Town’s Glenn Geater holding his Springbok jersey between his thumb and forefinger at a bar in Table View in Cape Town said:

“Sport unites the country. Look around you – everybody is united.”

Screams went out as Captain Siya Kolisi raised the Webb Ellis trophy on a giant screen . Patrons at the He’s Not Here Bar in Table View waited anxiously for President Cyril Ramaphosa to arrive while some muttered about former president Jacob Zuma.

Queen’s We Are the Champions blasted at final whistle at the IT Experience cafe, with everybody singing along to the late Freddie Mercury’s iconic song, with high fives and hugs all around.

Hooters, revving bikes and the start of a long party carried over happy shrieking

Elsewhere, at the British High Commission in Cape Town, a group of English fans in the Mother City had to settle for “better luck next time”.

A chorus of Shosholoza rang out at the British High Commissioner to South Africa’s residence in Cape Town as the Springboks edged to their win on Saturday.

Shouts of “Go Boys!” filled the air and the South African fans hugged and waved flags as those in English colours digested the news that they had lost.

High Commissioner to South Africa Nigel Casey was a good sport, shaking hands after the game with beaming supporters.

In Pretoria, Mava Kalolo, 22, said he felt the presence of an entire United South Africa at Loftus Park.

Kalolo was among many who became emotional as the final whistle blew.

“The win made me ecstatic, for a moment I forgot about all the issues and just celebrated with fellow South Africans,” he told News24.

Matome Moloisi, 28, also at Loftus Park said he knew South Africa would win, but wasn’t prepared for the celebrations afterwards.

And in Zwide in the Eastern Cape, supporters packed out Zwide Stadium, the former training ground of Bok captain Siya Kolisi, to watch him lift the trophy all these years later.