There was a brief moment where it looked like JP Kruger was in serious trouble as Tumelo Maputha laid on the hurt during their middleweight encounter at EFC Africa 22 at Carnival City on Thursday night. 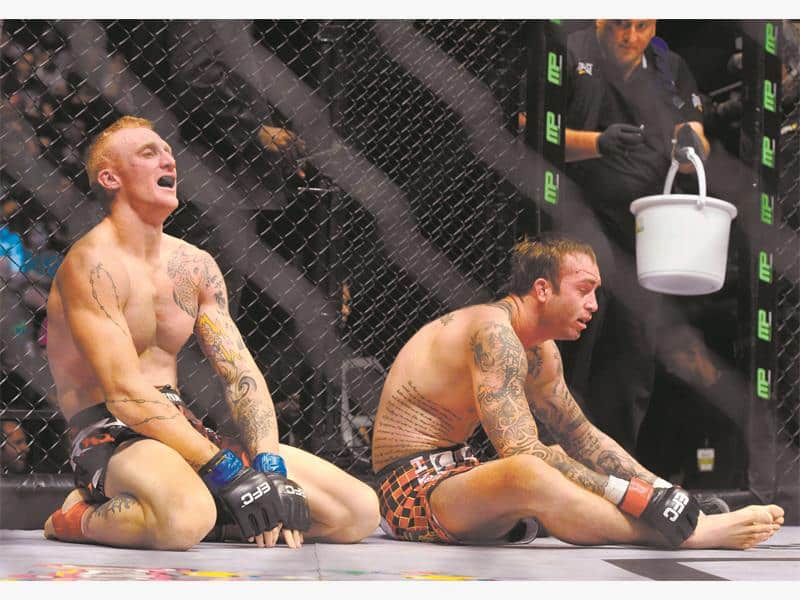 But in a flash the maincard bout swung the way of “Tinkerbell” as he somehow managed to turn it around and trap Maputha in an armbar that forced the Team CIT fighter to submit and concede defeat.

“Tumelo came out and I tried to keep composure moving away from his strong hand. Everyone knows he’s got a great right hand. By the fourth kick I was injured. I got rocked about three times,” Kruger said in the aftermath.

A tentative start saw Kruger, who is next in line for a crack at the middleweight champion which will be decided when Jeremy Smith defends against Garreth McLellan later this year, steered well clear of Maputha’s attack.

As the fight headed into the final minute of the first round Maputha landed a leg kick that looked to have done damage to the eventual winner’s knee and the end looked near as the barrage of punches flew once Maputha had taken Kruger to the ground.

But Kruger latched onto the arm of his opponent and forced the submission at 4:19 of the round to not only earn the Submission-of-the-Night prize but also a possible tilt at the championship belt.

“I’m going to come in October and see who the champion is between Soldierboy and Pitbull. Both have been real gentlemen towards me. From November to January I’ll be training in Thailand and I will be coming back to face the champion,” Kruger said.

“Maputha kicks like a donkey. This was not my first fight, I’m a fighter and it’s not over till the fat lady sings.

“The ref didn’t stop it and I saw an opportunity.”

Knockout-of-the-Night honours went to lightweight contender Frederich Naumann as he lived up to his prediction of an early stoppage of Dallas Jakobi.

A kick to the head looked to have rocked Jakobi before the left fist of “The Ninja” floored the Durban fighter and ended proceedings inside the first minute of the second round.