Faf gives Tutu a glimpse of the national underpants

Tutu was later spotted jiving away at the City Hall next to the statue of his friend, the late Nelson Mandela. 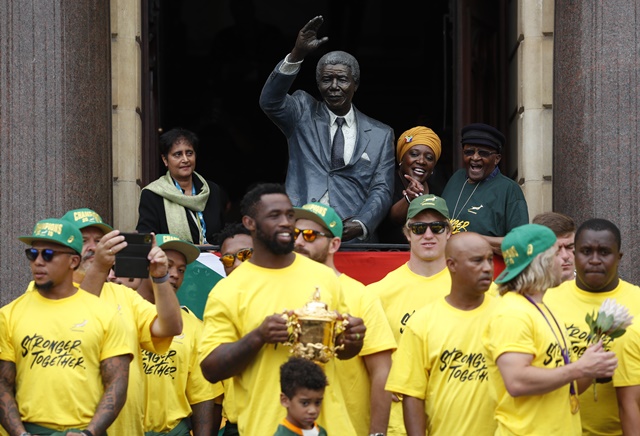 Anglican Archbishop Emeritus Desmond Tutu got a quick glimpse of the national Speedo made famous by Springbok hero Faf de Klerk when he met the team at Cape Town City Hall on Monday.

In his usual jovial fashion, Tutu met the team on Monday shortly before they were introduced to the adoring crowd on the Grand Parade in the last leg of the Springboks World Cup victory tour.

A smiling Tutu hugged Lukhanyo Am, posed for pictures with captain Siya Kolisi and the trophy, and was even offered a quick peek of Faf’s famous Speedo in the South African flag colours.

Tutu was later spotted jiving away at the City Hall next to the statue of his friend, the late Nelson Mandela.

“Hier kom die Bokke” belted out of the sound system while the team was on stage, with Tutu waving excitedly behind them.

“What this group of youngsters has achieved speaks, beyond rugby, to the possibility of what we can be. No matter where we come from, if we reach for the stars we can actually touch them,” said the 88-year-old Tutu, who played rugby as a youngster.

Tutu and his wife Leah’s foundation said “the Arch” was thrilled to meet the team in Cape Town, being a passionate Springbok supporter and a massive fan of Kolisi and coach Rassie Erasmus.

The popular cleric was dwarfed by most of the players as he went around giving shoulder bumps and hugs, and saying a few words to thank the team for their work.

He said the wave of patriotism and goodwill sweeping the country in the wake of the Springboks’ win, revisited the promise of the united, non-racial society Mandela and his colleagues had embodied a generation ago.

“It creates the opportunity for all South Africans to reflect how far we have journeyed since 1994, and how far we still must travel,” the foundation said.

“We have had similar moments of high symbolism in the past, that on reflection we have failed to harness for sustainable effect.

“We cannot afford to sit back and bask in our glory now; we must use the momentum to deepen our commitment to building a nation in which all citizens are of equal worth and have equal opportunities to shine.”