KZN govt expects tornado damage to run into the millions

The eThekwini Municipality has warned residents of a looming downpour on Thursday and Friday, which could result in flooding. 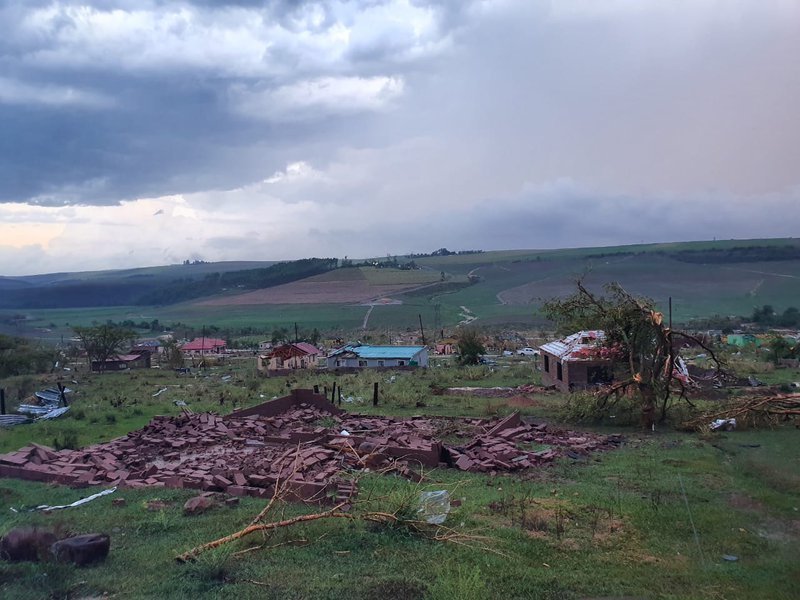 Destruction in Hanover Park, KwaZulu-Natal, after a tornado swept through the area. Image: Twitter/@GovernmentZA

The KwaZulu-Natal provincial government says it expects damage to homes and infrastructure to run into the millions following Tuesday’s tornado which ripped through New Hanover, Pietermaritzburg.

The province is still bracing itself for more inclement weather – which will bring with it severe thunderstorms over the next few days – as some families continue to pick up the pieces.

The broad strokes of the statement released by the Department of Cooperative Governance and Traditional Affairs on Wednesday were aimed at how the province has been grappling with bad weather over the past few months.

“Since October 2019, KwaZulu-Natal has been experiencing extreme weather conditions, triggering severe thunderstorms, lightning strikes, gale-force winds and heavy downpours that have wreaked havoc across the province.

“They have caused fatalities, injuries and inflicted major damage to households and public infrastructure,” the statement said.

Regarding Tuesday’s storm, the department said disaster teams would remain on the ground to provide support to affected communities.

Coordinated response units would be channeled via the human settlements, transport, social development, education, health and public works departments as well as municipalities.

The statement continued: “The estimated damage will be known once full assessments have been concluded but the damages are estimated to run into millions of rand. As the assessments continue, figures continue to change as new homes are being added to the list.”

In the meantime, public facilities such as churches and community halls are being used as temporary shelters for those displaced by the storm.

The eThekwini Municipality has warned residents of a looming downpour on Thursday and Friday, adding the anticipated downpour could result in flooding.