A days-old giraffe calf was found abandoned and in bad shape, but thanks to expert care, love, and a new furry best friend, Jazz is making good progress. Jazz munching on a flower. His condition has greatly improved, but he's not out of the woods yet. Images: Facebook/The Rhino Orphanage

Non-profit rescue organisation The Rhino Orphanage, based in Limpopo, specialises in caring for orphaned and injured baby rhinos, with the aim of rehabilitating and eventually releasing them into the wild.

However, on Friday, they received a call to rescue a different species – a tiny, dehydrated baby giraffe, estimated to be about two to three days old, who had been abandoned by its mother. The owner of a game farm in the area called The Rhino Orphanage after finding the calf.

Although there are instances in the wild where animals are abandoned by their mothers in the wild, this is usually because there is something wrong with the baby, explains the founder of The Rhino Orphanage, Arrie van Deventer.

Although Jazz, the name given to the giraffe calf, seems healthy, Arrie did say that his ribs were sensitive when he was first brought in. He speculated that the mother may have accidentally stepped on him, or the 1.5-metre drop giraffes experience during birth may have resulted in Jazz landing on a rock.

However, orphanage staff are hopeful that there is nothing wrong with him.

Jazz’s health has improved drastically from Friday. When he first arrived, he was comatose and dehydrated. But, thanks to round-the-clock care by veterinarians and Jazz’s new best friend, a Belgian shepherd named Hunter, he is alert and eating. Hunter and his brother Duke are six months old, and are currently receiving tracking training. Their job is to protect baby rhinos that live at The Rhino Orphanage.

Arrie said that Hunter had really taken to Jazz, and that he had been extremely protective over him.

“Animals are pure souls. They are not like us,” he enthused. Hunter doesn’t let Duke anywhere near Jazz, and when Jazz was in a coma, Hunter refused to eat. It was only after Jazz improved that Hunter began eating normally again. This would be the first giraffe rescue The Rhino Orphanage has dealt with since opening its doors in 2012.

“When there’s a need, we help,” Arrie said, adding that the aim was for Jazz to stay at the orphanage until he had gone through all the stages of development. After this, Arrie explained that he would probably be returned to the game farm where he was found, to live out his life like a normal giraffe.

Although there was not yet a time frame for when Jazz would make a full recovery, and vets had a scare on Tuesday after Jazz had a slight rise in body temperature, he was improving drastically.

Jazz also has blood pooling in the front chamber of his right eye, which vets say was caused by the first 24 hours when he was comatose. Due to eye treatments, Jazz can’t go outside yet, but his rehabilitation room is looking cosy, with make-shift trees strung from the ceiling for snack time. 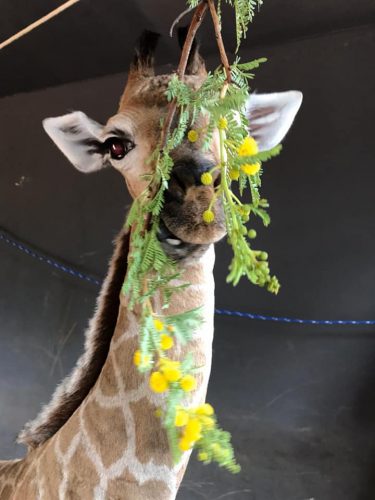 Arrie said he and his team were holding thumbs for little Jazz, and were optimistic that he would make a full recovery.