The left-arm spinner puts the specialist batters to shame as he holds up England's victory drive. Stuart Broad and team mates of England celebrate the wicket of Vernon Philander of South Africa during day 5 of the 3rd Test match between South Africa and England at St Georges Park on January 20, 2020 in Port Elizabeth, South Africa. (Photo by Ashley Vlotman/Gallo Images)

The Proteas’ crushing and comprehensive defeat to England in the third Test in Port Elizabeth took longer to realise than anticipated on Monday’s final day.

And that was pretty much all down to Keshav Maharaj.

South Africa’s gutsy left-arm spinner put the specialist batsmen to shame, striking his way to a 71 before the home side eventually suffered an innings and 53-run reverse.

Most impressively, Maharaj struck a decent balance between defence and attack, thrillingly smashing Root for 24 runs (plus four byes) in his 29th over, which included two sixes and three fours.

Keshav Maharaj is having fun in the middle as he takes Joe Root to the boundary five times in a row! He's now brought up his half-century, the highest scoring Protea this innings.#SAvENG pic.twitter.com/T3U0fAOHqN

Clearly batting with free reign, he combined for a 99-run last-wicket stand with debutant Dane Paterson, who was no slouch either in ending with 39 off just 40 deliveries.

It didn’t mean much in terms of the result, but hopefully it shows the rest of their teammates the value of gritting things out in the pinnacle format of the game.

At the start of the day, survival was always going to be the name of the game, but South Africa had no business even trying to pursue such an objective.

And no, it wasn’t because they were in a wobbly position – 102/6 – going into the day, but rather the fact that this confidence-starved batting order can’t be expected currently to do that.

Proteas survival acts under Graeme Smith were performed by men who knew when to strike the balance between defending doggedly and still looking for runs.

The group under Faf du Plessis, who so memorably made 110 on debut in 2012’s Adelaide Escape, have no clue.

Some of them simply freeze themselves out.

Until this batting order doesn’t start gradually – let one not be unfair – batting with more conviction, continued heartache is on the cards.

Vernon Philander’s wicket off the third ball of the day, when he inside edged Stuart Broad to Ollie Pope at short leg set the tone of continued failure.

The veteran all-rounder is a proper batsman and needed to take responsibility.

As a result, it was left to Keshav Maharaj and Kagiso Rabada, the last competent batters, to conjure up some fight. 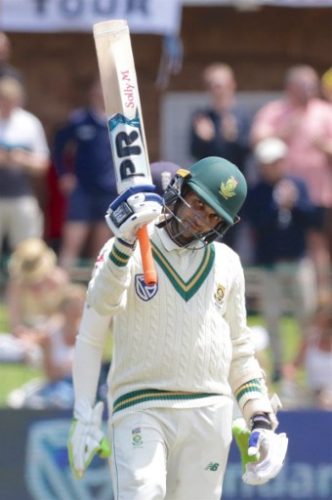 South Africa’s Keshav Maharaj celebrates after scoring a half-century (50 runs) during the fifth day of the third Test cricket match between South Africa and England at the St George’s Park Cricket Ground in Port Elizabeth on January 20, 2020. (Photo by Richard Huggard / AFP)

Rabada wasn’t quite as successful, perhaps looking to be a tad too aggressive despite playing a few good shots.

Not that one should’ve expected batting heroics from the Proteas’ premier BOWLER anyway.

By the time Dom Bess castled Anrich Nortje, the tailender who put the specialist batters to shame to date in this series, the writing was on the wall, but at least the fun then began.

The rapid Mark Wood finished with figures of 3/32, while Root missed out on a maiden five-for but still played a major role in ending with 4/87.