'Our government is ruthless. How can they destroy our homes during lockdown? How are we supposed to remain indoors if we don't have homes?' 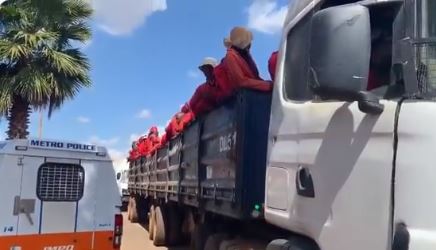 Rubber bullets flew on Tuesday as residents of Lakeview informal settlement in Johannesburg clashed with about 600 Red Ants who had been ordered to demolish “unoccupied” shacks.

This was the second time this month the Red Ants had been deployed to the area.

Last week, they destroyed shacks and brick houses in the Kokotela informal settlement near Lakeview.

Both areas are located in Lawley.

Despite pleas from residents, the Red Ants got to work on Tuesday.

#LockdownSA a shack belonging to Thato Seleka being destroyed in his presence. He claimed that some Red Ants stole his pair of shoes @TeamNews24 pic.twitter.com/yXn58Wremx

Thato Seleka was cleaning his yard when the Red Ants arrived and told him they were there to destroy his shack.

His pleas fell on deaf ears as he watched his home being demolished and his corrugated iron sheets confiscated.

“I told them I am living here. I showed them a sponge I was sleeping on and some of the cooking utensils, but they continued destroying my home.

“They said a sponge and cooking utensils were not evidence that I was occupying my shack. They said I should sleep on a bed not a sponge and for that they destroyed my home. Where am I going to buy a bed because I am not working?

“What they did is wrong. It so sad that I have been here since last year and they come now and accused me of arriving in Lakeview recently,” Seleka said.

#LockdownSA A woman who collapsed when JMPD officers opened fire using rubber bullets at a mob that fled into her yard in Lakeview near Kokotela @TeamNews24 pic.twitter.com/dMMFVU2wzk

Solomon Madisha claimed he had bought a piece of land for R2,500 last year from Lakeview and Kokotela committee members.

Madisha said he only recently erected his shack.

“Yesterday, I completed my shack by plastering the floor. I have never seen such brutality from the Red Ants. They didn’t want to hear my explanation and tore apart my shack.

“I asked why, and they said I was not living there and should move away. I am homeless and have nowhere to sleep during this lockdown. My home is gone,” he added.

Margorie Cass claimed she had been living in her shack since July last year.

“They (the Red Ants) saw my furniture inside and told me that I was lying when I told them I was living here. They took away my furniture and my corrugated iron material. I am going to lay a case of theft against the Red Ants.

“Our government is ruthless. How can they destroy our homes during lockdown? How are we supposed to remain indoors if we don’t have homes?” asked Cass.

As the day progressed, residents clashed with the Red Ants, pelting them with stones.

Officers on the ground said about 13 people were arrested.

#LockdownSA residents of Lakeview informal settlement outside Ennerdale police station demanding those who were arrested to be released (@ntwaagae) pic.twitter.com/7wSwkiJS7y

While there, officers went to Victoria Maphalala’s shack, where some residents were hiding and arrested them.

An elderly man was taken to hospital after a rubber bullet hit him in the neck.

Residents later marched to the Ennerdale police station demanding the release of those who had been arrested.

They later went home and vowed to return in the evening to fetch them.

“As stated previously, as a City we do not celebrate these routine court victories. Our preoccupation is the prevention of land invasions for the sole purpose of implementing planned development within the City for the benefit of the poor and growth of the City.

“The City is committed to planned human settlements that will provide affordable and social housing for the poor that includes basic services such as water, electricity, sanitation and waste removal,” said Makhubo.

He added seven people had been previously arrested for illegally invading land.

Makhubo said the City was following leads that might lead to the arrest of the kingpins responsible for the illegal sale of land.

“We urge those who were defrauded and illegally sold land to come forward and report their cases to the South African Police Services to assist the process of investigations and justice.

“We once more encourage our people to obey the coronavirus and lockdown regulations. They must remain safe and stay indoors unless performing an essential service,” he added.