‘Bravest of us all’: ANC, friends, family honour Denis Goldberg at digital memorial

The memorial was held virtually due to the regulations put in place to combat the spread of the coronavirus and was a far cry from the norm. 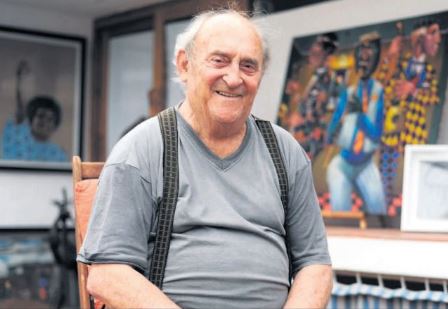 Cyril Ramaphosa, in his capacity as ANC president, joined family and friends of Rivonia trialist Denis Goldberg to honour the fallen liberation hero, calling on his comrades to reflect on what it means to be devoted to the country.

“The ANC, the movement to which he devoted his life, faces perhaps its greatest test of leadership since 1994,” said Ramaphosa.

The memorial was held virtually due to the regulations put in place to combat the spread of the coronavirus and was a far cry from the norm.

Usually, when the ANC holds memorials for its veterans who have died, halls and stadiums are packed with leaders and supporters to celebrate them.

Goldberg died at the age of 87 in Cape Town last week.

He was referred to as Isthwalandwe or Seaparankoe, the highest honour given by the governing party to those who devoted their lives to the struggle and endured personal sacrifices for liberty.

Goldberg was praised for having unquestionable integrity and for not failing to hesitate to remind the party’s leadership of its responsibilities when it strayed.

Ramaphosa said the memorial of the youngest Rivonia trialist and former Umkhonto we Sizwe combatant was the perfect time to call on party members to act in pursuit of economic justice, compassion and freedom.

“The plight of the weak, the vulnerable and the poor must now be our foremost,” he added, saying the lives and livelihoods of many in the country were at stake.

“He was the bravest one out of all of us by far,” said activist and childhood friend Judge Albie Sachs.

Sachs, who is also the patron of the Denis Goldberg Legacy Trust, focused on the fallen trialist’s sacrifices and courage.

“Denis gave himself up, completely to the struggle … providing weapons for the armed struggle.”

He said the same courage did not desert him even after he had been captured.

“It’s the sacrifices he refused to make which was important. He refused to sacrifice his passion for liberty.”

Sachs like Ramaphosa, brought the reality of the Covid-19 pandemic into his tribute, saying Goldberg believed in picking up the spear and said unlike during the struggle when it was meant in a literal sense, this time around it was in search of a vaccine to halt the deadly virus that has infected millions and killed hundreds of thousand across the globe.

Goldberg’s grandchildren, who are based in London, also paid tribute to their grandfather along with those in other parts of the country who knew him.

Andrew Mlangeni, who is the last remaining trialist, praised his friend and comrade, saying Goldberg refused to enjoy the privileges of being white in apartheid South Africa when the majority continued to languish under an oppressive regime.

“He said I can’t enjoy these things when my fellow black comrades in South Africa are denied these rights,” said Mlangeni.

He also reflected on the trial that captured the imagination of many across the globe and sent freedom fighters – including South Africa’s first democratically elected president Nelson Mandela, Goldberg and him – to prison.

Mlangeni said the fight was against the policy of apartheid.

“He believed the views of the majority must prevail,” he added, praising his comrade for allowing the black trialists who were on Robben Island to dictate what should happen to everyone when offered an opportunity to appeal.

This as Goldberg languished in a Pretoria prison with other white political prisoners.

Mlangeni congratulated him for the sacrifices he made to get South Africa where it is today, closing off by saying he believed other trialists, who have died, were waiting for him to join ANC branches on the other side.