"Can we all agree that the ANC is just a Mafia/mob of old people who only enrich specific families, friends, relatives, and their own families," Trump is claimed to have said. 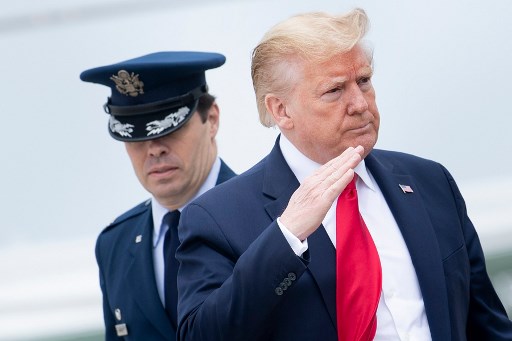 US President Donald Trump boards Air Force One at Andrews Air Force Base May 21, 2020, in Maryland. Picture: Brendan Smialowski / AFP

As the world and South Africa continue to deal with the scourge of the coronavirus pandemic, the so-called “infodemic” fuelled by fake news and hoaxes continues to be spread by conspiracy theorists and well-meaning, but ignorant, people.

Every week, new hoaxes find their way on to people’s phones and social media accounts.

Various organisations have made it their mission to fact-check these mostly false claims, such as Africa Check, which sends out a weekly WhatsApp to debunk recent fake news and disinformation.

Here are some of the latest false claims: The ANC is a mafia enriching its own – Trump One of the recent claims that found its way on to people’s Instagram accounts was that US President Donald Trump took a cheap shot at South Africa’s governing party.

“Can we all agree that the ANC is just a Mafia/mob of old people who only enrich specific families, friends, relatives, and their own families,” Trump is claimed to have said, much to the delight of the party’s detractors.

The image is captioned: “What is Tonald saying?? (sic)” “[The ANC] are just thugs who wanna be celebrities,” the tweet ends.

Trump has commented on South Africa’s government before.

In 2018, President Cyril Ramaphosa announced plans to begin the process of land expropriation without compensation.

Trump then tweeted that he had asked his secretary of state, Mike Pompeo, to “closely study the South Africa land and farm seizures and expropriations and the large-scale killing of farmers”.

Has Trump now criticised the ANC directly on Twitter?

Factba.se is an AI-powered database that stores every communication that comes from Trump’s social media accounts, interviews, and the White House.

The tweet does not appear in its database of Trump’s current or deleted tweets.

It can therefore be safely said that Trump did not tweet that the ANC was a “mob of old people”.

A graphic widely shared on Facebook since 15 May 2020 claims that 250 staff at shops in Alberton, south of Johannesburg, tested positive for Covid-19.

“If you know of a family member that went to any of the malls at Alberton this week tell them that 250 employees around those malls tested positive on Monday and they told them to continue working,” it reads.

Alberton falls in one of six districts of the City of Ekurhuleni municipality.

On 26 May the district, which includes nine other settlements, had 123 confirmed cases of Covid-19.

A few “hotspots” in the town could not have had 250 cases 10 days earlier.

On 15 May, the Alberton City Shopping Centre posted the graphic on its Facebook page with “Fake News” stamped on it.

“There have been NO confirmed cases of Covid-19 among the retail employees at Alberton City Shopping Centre to date,” the post reads.

“We continue to do our best to ensure a safe shopping environment, and we are taking all of the necessary precautions.”

The Alberton Record community newspaper investigated the graphic and found it to be false.

Alberton ward councillor Tiaan Kotze told the newspaper that, as of 15 May, there were “only 93 positive cases in our sub district of Ekurhuleni South 1.”

The image of the 250 positive cases in the malls of Alberton is fake news.