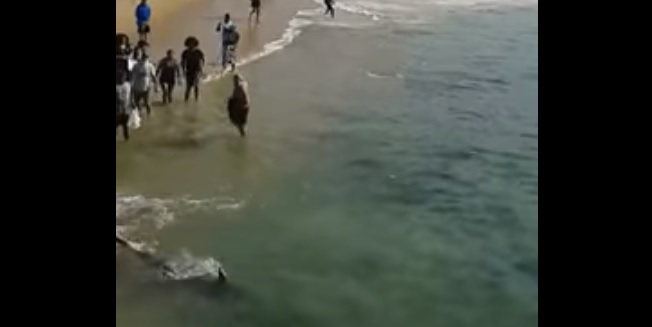 South coasters in KwaZulu-Natal have been within arm’s reach of sharks which have moved close to shore as they follow the sardine action.

On Monday morning, four or five sharks swam up to the people, including children, who had entered the water to try and grab their share of the little silver fish at Rocky Bay near Scottburgh, reports the South Coast Herald.

The video, showing sharks swimming near the shore while a net full of fish is hauled in, made the rounds on social media platforms such as Facebook and on WhatsApp groups. 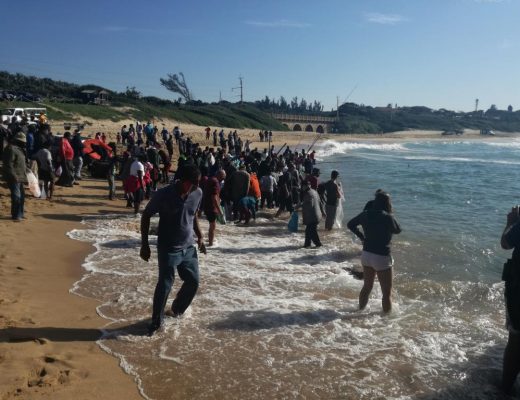 People at Rocky Bay attempt to catch sardines from the water where several sharks were spotted.

A Park Rynie fisherman who witnessed this encounter said that as more sharks came closer to shore, more people entered the water trying to catch the sardines.

“I saw a man trying to chase the sharks away by hitting them with a small fishing net,” he said.

“Yes, he was trying to protect people, but those people should be more cautious next time so no harm comes to these creatures which are only looking for food in their natural habitat.”

Reports indicate that bull sharks, grey sharks and bronze whalers have been seen trailing the sardines throughout the mid-south coast area.

As South Coasters continue netting the sards, other marine life such as bigger fish, dolphins and whales have been more visible too.

With this in mind, continue to be part of the action, but be cautious at the same time.