This is only the ninth recorded sighting of the species in South Africa since 1946. Marine biologist Dr Gwen Penry says she was alerted to reports of a seal on Robberg Beach, Plettenberg Bay on Monday morning, in which on closer inspection it was established that the animal was a leopard seal (hydrurga leptonyx).

According to Penry, spotting these creatures along the South African coastline is a truly rare occasion as their normal range is in the Antarctic and sub-Antarctic islands more than 4,000km away.

Last month the carcass of a juvenile leopard seal was found along Cape Recife beach in Port Elizabeth in the Eastern Cape.

This was only the ninth recorded sighting of the species in South Africa since 1946. Before that, the last one was found in Milnerton near Cape Town last year.

The Plettenberg Bay sighting was likely the tenth one spotted in South Africa in more than seven decades. 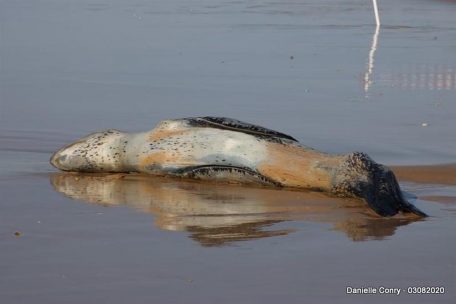 Penry said the seal was a juvenile male with an estimated length of about 2m, and added that they can grow up to 3.7m in length and reach a weight of about 600kg.

“This individual is very thin, but after a slow start dragging himself down the beach, he eventually headed back out to sea,” said Penry.

Marine biologists are unsure how these seals end up along the South African coast, but believe it could be that young animals become lost and swim out of their range.

Penry warned that should a leopard seal be spotted on the beach, it should not be approached as it may just need time to rest.

“Please report it immediately to Beach Control or the Plett Stranding Hotline 079 463 4837,” she advised.

She explained that leopard seals are apex predators and have enormous teeth and powerful jaws.

They feed on penguins, smaller seals, fish and krill, but will feel threatened by humans or dogs if approached, which could cause an aggressive response.