Rhodes University's Centre for Biological Control is optimistic that we can learn to live with water hyacinths, and can keep weed levels below levels that could cause further damage to the area’s dam and surrounding ecosystems. The world's worst aquatic weed, the water hyacinth, will continue to thrive on the surface of Hartbeespoort Dam. But there are ways to manage this infestation, according to Rhodes' CBC. Photo: Kormorant

Although the study said the weeds can potentially be managed below a level that is damaging, so that the dam can stay open for use, the size of the dam and the amount of seeds scattered in the area means “we have to learn to live with water hyacinth.”

Water hyacinths are indigenous to the Amazon basin, but have spread rapidly around the world, and are today branded by the Agricultural Research Council (ARC) as “the world’s worst aquatic weed”. Water hyacinths are spreading rapidly on the surface of the Hartbeespoort Dam. Photo: Magaliesberg Biosphere

Water hyacinths cover entire surfaces of dams, such as Hartbeespoort and are detrimental to local aquatic ecosystems and biodiversity, ARC explained.

The weeds can cause rivers to block, lead to flooding, lack of water for communities reliant on water sources along dams and rivers, and interfere with water activities such as fishing and boating. They are also known to create breeding grounds for mosquitos and other unwanted pests such as the bilharzia-carrying snail, while rotting hyacinths can reduce the quality of the water. Water hyacinths have been present in South Africa since 1910, especially in the eastern and southern parts of the country and are spread mainly due to the activities of gardeners, aquarium owners and boaters.

This is because they are so easily spread. In Hartbeespoort, the Rhodes study explained that a large seed bank already exists within the dam’s sediment and that each water hyacinth flower can produce thousands of seeds which lurk in the waters for years. The size of one water hyacinth. Photo: Agricultural Research Council

Due to water hyacinths being a staple in the dam for almost 50 years, a significant seed bank was able to build up.

How to control it

A number of initiatives have cropped up in the past few years after water hyacinths spread so far out in Hartbeespoort Dam that it resembled a field of green plants, rather than a massive water body.

In 2018, Kormorant reported that local businessman Papilele Mglailo purchased a machine capable of eradicating around 2 000 square metres of hyacinths every hour.

The investment saw hyacinths being turned into fertiliser and animal feed. Local group Harties Foundation also released a five-year plan to remove the weeds last year. The plan involves containing selected areas of hyacinths to keep the water clean, sustainable harvesting hyacinths to be turned into commercial fertiliser and maintaining litter traps and measures to improve the overall quality of the dam water.

The Vaal University of Technology estimated that in 2017, just more than 30% of the dam’s surface was covered by hyacinths.

Rhodes University reported in its latest study that biological control is the most effective, sustainable and cost-efficient way to control the weeds.

The CBC has had success in using biological control agents to eradicate water hyacinths. Above are before and after photos of a project in Alicedale, Eastern Cape, after weevils were released into the area. Photo: Rhodes CBC website

The CBC’s campaign involved released water hyacinth plant hoppers as biological control agents from 2018 to 2020. These include M. scutellaris and the water hyacinth weevil, both of which are herbivores that eat hyacinths. 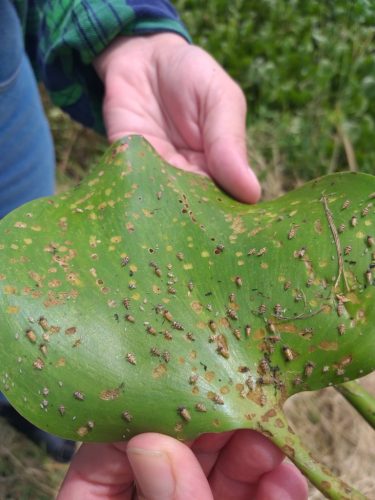 Megamelus scutellaris insects and weevils are said to be the most cost-efficient, sustainable and effective solutions to keeping water hyacinths under control in the Hartbeespoort area. Photo: Kormorant

The CBC has set up facilities around the dam with partners such as the Harties Foundation and saw water hyacinth levels drop to as low as 2.5% during this year’s winter months.

But as winter became colder and plants began to diminish, the amount of insects left clinging to the hyacinths dwindled, which allowed the plants to regrow.

The seedlings lying dormant in the dam’s sediment have not yet been exposed to the eager biological agents and as South Africa enters summer, coupled with the country’s nutrient-rich waters, there are fears that hyacinths will begin to appear again in earnest. As such, the CBC explained it would implement “an augmented release strategy”, where insects are released regularly “to inundate the plants”. This can be done as soon as there are enough insects big enough to be released from facilities rearing them in the area.

It is hoped that the CBC’s biological control agents are able to eat through enough water hyacinths to keep the dam open for use and reduce flowering to deplete the seed bank lurking in Hartbeespoort’s waters. 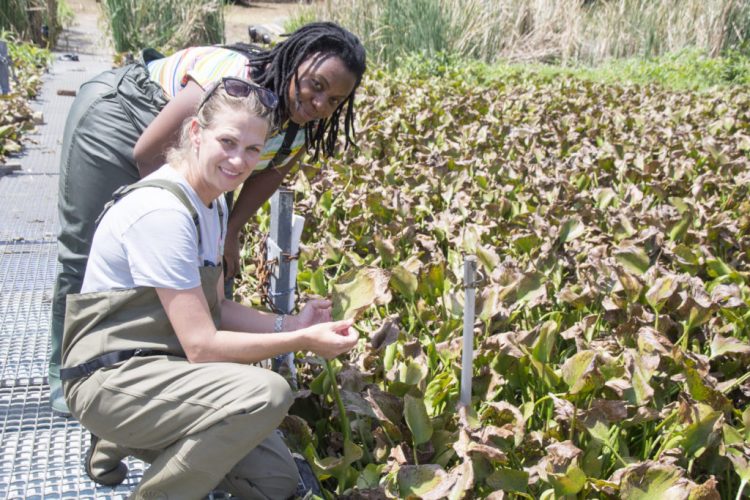 “There is no quick way to reduce water hyacinth at present and until the seed banks are depleted, which will take years, we will still face regrowth from the seedlings every year,” the CBC said.

“Eradicating the plant is also highly unlikely due to the size of the dam and the extensive seed bank in the sediment, so we have to learn to live with water hyacinth.”

But the CBC is optimistic we can learn to live with water hyacinths and can keep the weed below levels that could cause further damage to the area’s dam and surrounding ecosystems.

Images from Caxton publication Kormorant were used with permission.