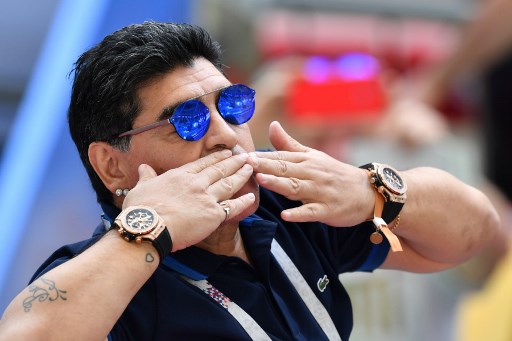 (FILES) In this file photo taken on June 30, 2018 retired Argentine player Diego Maradona attends the Russia 2018 World Cup round of 16 football match between France and Argentina at the Kazan Arena in Kazan. - Argentinian football legend Diego Maradona passed away on November 25, 2020. (Photo by SAEED KHAN / AFP) / RESTRICTED TO EDITORIAL USE - NO MOBILE PUSH ALERTS/DOWNLOADS Brazilian great Pele led global tributes to Diego Maradona, whose death was announced on Wednesday, saying one day they would “play soccer together in the sky”.

Renowned for inspiring Argentina to World Cup glory in 1986, Maradona was most loved at club level for his spells with Boca Juniors in his homeland and Napoli in Italy, where he won the club’s only two Serie A titles.

Maradona is remembered for his masterly skill with the ball, but he was also famous for his frequent lack of control on and off the field.

A service delivery protest march between Groblersdal and Marble Hall in Sekhukhune has left two people dead and one fighting for his life in a Limpopo hospital.

The march took place on Tuesday and Wednesday in Masakaneng village, outside Groblersdal, when angry residents clashed with police during the service delivery protest.

Disciplinary action against 20 EFF MPs, accused of attacking Public Enterprises Minister Pravin Gordhan during a budget vote speech, proceeded despite the accused members failing to show up before parliament’s Powers and Privileges Committee.

On Wednesday, proceedings went ahead despite the absence of the accused MPs.

EFF MP Mbuyiseni Ndlozi argued against the hearings and proposed the matter be heard by a retired judge or senior council.

Finally, compensation for Kuga owners whose cars went up in flames Picture for illustration. A Ford Kuga in flames on the N12 East near the Jet Park off-ramp in Johannesburg, 2 August 2017.

Ford has now finalised the compensation for consumers whose Ford Kugas caught fire a few years ago, with only three consumers electing to take the matter further and 47 choosing to accept a payment of R50 000 each.

According to this agreement, Ford agreed to pay each consumer R50 000 as compensation if their Kugas were distributed between 2014 and 2017 and was one of the 56 that caught fire when flames started in the engine compartment and damaged the vehicle.

Proteas will wear black armbands, but they won’t take a knee

The Proteas formally announced on Wednesday that, after much internal discussion and engagement, they have decided not to take a knee to show their support for Black Lives Matter during their white-ball series against England that starts on Friday evening.

In what was described as an “official Proteas statement”, the team said their decision to not take a knee, which is the opposite of what they did for the 3TCricket launch in July, was not influenced by management nor the coaches, but was entirely the will of the players as a whole.

IN PICS: Inside Mshoza’s memorial service Short, tight, shiny, sexy and see-through are not exactly the adjectives one would expect to use when describing the attire at a memorial service.

However, after attending the memorial service for Kwaito Queen Nomasonto “Mshoza” Maswanganyi at Newtown’s Bassline on Wednesday, one would understand why she probably would have wanted it that way.