Mzansi reacts to new Covid-19 variant – even given new name

The Health Minister Zweli Mkhize said the new variant was first found in Nelson Mandela Bay, and they don’t know yet how severe this variant could be. 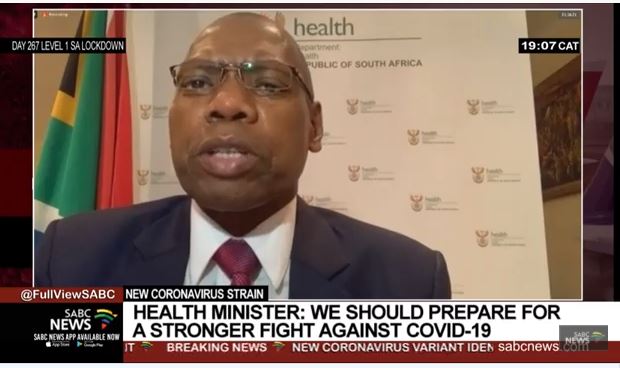 Health Minister Zweli Mkhize with a panel of scientists announced on Friday evening that there is a new Covid-19 variant that is causing the second wave.

The variant SARS-COV-2 Virus, termed as 501.V2 Variant, has been identified by South Africa’s genomics scientists.

Mkhize said: “This genomics team, led by the Kwazulu-Natal Research Innovation and Sequencing Platform, or KRISP, has sequenced hundreds of samples from across the country since the beginning of the pandemic in March.

“They noticed that a particular variant has increasingly dominated the findings of the samples collected in the past two months.”

READ NEXT: The new virus variant and how we’ll deal with it – Mkhize explains

The health minister said the new variant was first found in Nelson Mandela Bay, and they don’t know yet how severe this variant could be. Young people who are healthy are now becoming very ill, as more of the youth are testing positive, Mkhize said.

Professor Salim Abdool Karim says a similar variant was found in other countries, such as UK and Australia, but the prevalence is much higher in South Africa at between 18% and 19% of all cases. Karim did clarify during the discussion that this new variant should not be labelled as a new strain of Covid-19.

ALSO READ: No reason to panic about virus variant – but Mkhize has stern message for the youth

As news of the new variant broke out, Mkhize quickly trended on Twitter after the announcement, including a new name for the variant.

Here is what people had to say:

#SARSCOV2MediaBriefing if Only Dr Mkhize can just tell us 2020 is the year wama last for US ALL..well even Norma Mngoma Gigaba did indicate that ” we are all gonna DIE in ONE DAY pic.twitter.com/tVVNhoAdN2

COVID VSOP, not the normal one.