The South African bowlers struggled to exert any pressure on the home team's batsmen, who ensured they will take a decent lead into the second innings'. 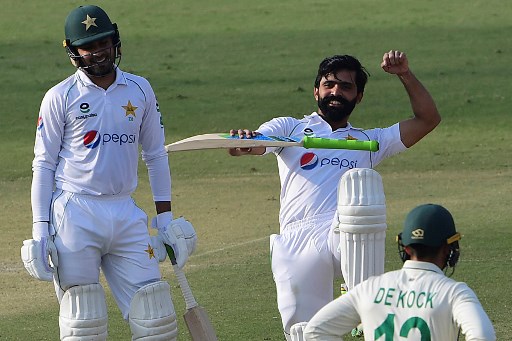 Pakistan's Fawad Alam celebrates after scoring a century during the second day of the first cricket Test against the South African Proteas in Karachi on Wednesday. Picture: AFP

South Africa experienced a tough day at the office on day two of the first Test against Pakistan after Fawad Alam’s century left them chasing the game at the National Stadium in Karachi on Wednesday.

The veteran all-rounder played a key hand in the hosts’ revival with a fine 109 (245 balls, 9 fours, 2 sixes) – his third career century – that helped lift his side to 308 for eight at the close.

Having showed so much of promise with the ball on the opening evening when they claimed four wickets, Mark Boucher’s side would have been hugely disappointed not to have kicked on early on the second morning. But to their credit, the Pakistanis batted with caution initially as Fawad and Azhar lifted them from 33 for four at the start to 121 before the next wicket fell – the latter edging Keshav Maharaj (2/71) behind to Quinton de Kock to end a 94-run stand.

The arrival of Mohammad Rizwan (33) then seemed to get the home side going as 55 were added for the sixth wicket by the pair.

Lungi Ngidi (2/55) broke that partnership to again give the Proteas hope, but they were then punished by a more fluent seventh-wicket partnership of 102 between Fawad and Faheem, a stand in which the former went to his century with a straight six off Maharaj to spark deserved celebrations.

Although men did eventually fall, Hasan Ali (11), frustratingly dismissed by a Maharaj no-ball before the close, and Nauman Ali (6) took Pakistan to stumps in the driving.

Afghanistan keen to host Pakistan in ODI series
5 days ago
5 days ago
PREMIUM!

Afghanistan keen to host Pakistan in ODI series
5 days ago
5 days ago
PREMIUM!