No decision has yet been made when Charlotte Maxeke Academic Hospital will reopen. 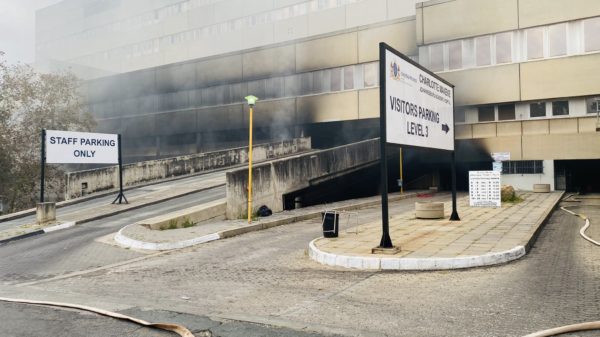 It is uncertain if Charlotte Maxeke Academic Hospital will reopen in two days’ time after a fire ripped through parts of the facility on Friday and Saturday.

Gauteng Premier David Makhura announced on Saturday the facility would be closed for seven days due to safety concerns over smoke that had funneled through the hospital.

“It’s not an easy decision we have had to make, but within seven days we are confident hospital services will be resumed,” said Makhura.

On Wednesday morning Makhura’s spokesperson Vuyo Mhaga could not confirm whether plans to reopen the hospital in seven days were still on track as per the Premier’s words.

“We will get advice from the infrastructure department, we await an update report,” Mhaga said.

Asked when the report is likely to be complete, he said: “It depends, we can’t put pressure on them.”

City of Johannesburg spokesperson Synock Matobako said the level above the hospital’s dispensary, where the fire started, had caved in and collapsed.

He said that the structural integrity of the building was compromised.

Health Minister Zweli Mkhize said on Tuesday the department had received a report from the infrastructural section which examined the state of damage to the facility.

He said that it was difficult to pronounce on this matter until a proper assessment was completed.

“No one can tell the amount of damage at this time until a proper and thorough assessment has been done.”