Tales from a hospital bed: Dreaming of Wayde, while stuck to a drip

The Citizen's chief sports writer has been in hospital for 11 days and he's not only made some friends in the ward, but even managed to soften up some of the nurses. 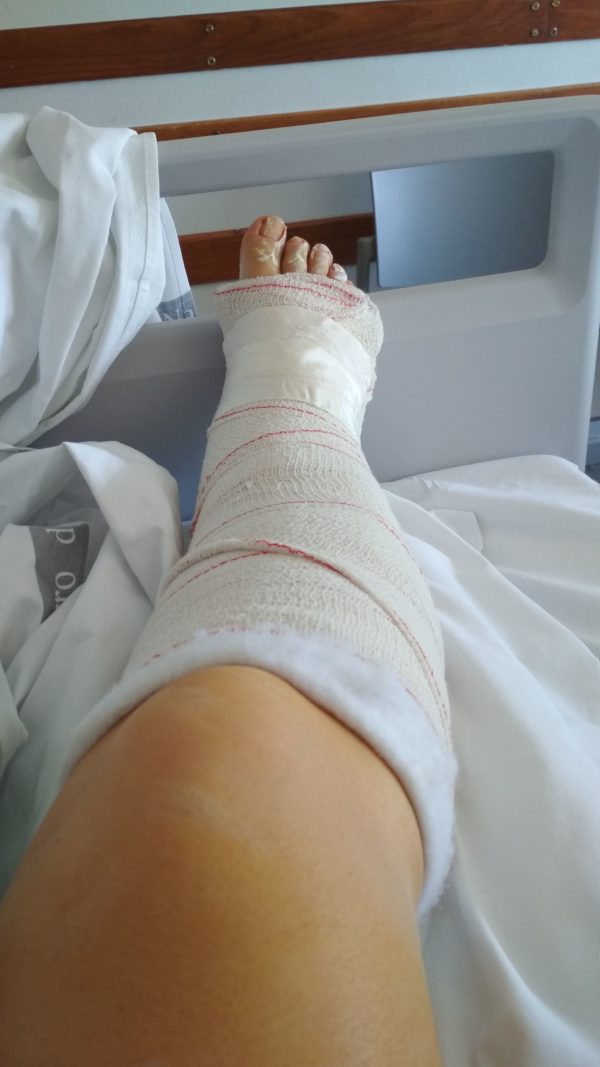 Not the best view one could hope for.

Had another op this afternoon ????

The doctor managed to straighten the middle bone in my toe – which was broken into four pieces – using three pins.

She also put a drain in my foot and took out the screw that was in there from my first op, which she gave me to keep.

This is the second post in the series of tales from Wesley’s hospital bed. Also Read: Tales from a hospital bed: Why you shouldn’t go fishing

When you wake up from an anaesthetic, you can be rather animated.

After my second op, I awoke yelling either for Wayde van Niekerk or at him. I like to think I was yelling for him.
This time I heard the surgeon say they would need to operate again. I thought she meant, like, immediately. I protested.

They quietened me down with some soothing words.

They will try get me back into surgery next week, but it’s hard to predict when.

Until Charlotte Maxeke Hospital opens, after the fire there, this place has been overflowing.

The doctors can’t keep up with the emergencies, and the conditions are not any more fair on them than they are on the patients.

They are trying to save lives and they’re struggling because they don’t have running water. It’s insane.

Michael should have an operation tonight. Holding thumbs for him.

Sikhumbuzo is getting used to his crutches. He can move around now 🙂

Frans sat in his chair for a bit today but he prefers to lie flat. I think it’s less painful.

Every time I want to sanitise my hands I have to hop across the room, which isn’t easy with a drip. It has become very frustrating.

This morning I realised there is a bottle of sanitiser attached to the wall right next to me. It’s next to my head.

This is why I need supervision.

When you arrive at casualty at a public hospital, it’s quite alarming.

People are being rushed in after car accidents and shootings. The nurses are in charge and they don’t play games.

They tell you where to sit, when to move and what to do.

And when you’re in an emergency, you listen.

The nursing staff are also in control of the various wards.

They seem harsh at first, like strict school teachers running a hostel and they make it clear they’re not interested in whining. Mothers, grandmothers, sisters and daughters, they are people and they all have their own problems.

Once you’ve spent some time with them, however, they start to show their softer side.

Sister Anna has been doing this for more than 20 years, but when the coronavirus hit, it hit her hard.

Her husband lost his job and then she fell ill with Covid-19. Many people in the medical profession did. Some of the nurses here packed up and left, feeling they were not being sufficiently supported by the government.

Fortunately, despite the risk, most of them stayed.

Anna tells me her two sons enjoy school and they’re in a good one. She says she is blessed.

Her biggest fear is that she won’t be able to keep them in school and they will turn to drugs. When she tells me this, she tries to maintain her composure, but she can’t hold back the tears.

So she keeps going, arriving for work every day and helping sick people.

But it’s a thankless job. The nurses here are extremely overworked and severely underpaid.

Like the teachers they remind me of, they are underappreciated by our society. We expect them to give so much but we offer little in return.

The gruff women who first started looking after me last week have become like my temporary mothers.

They ask about my family, they apologise when they hurt me unintentionally, they make sure I’m eating properly and they scold me when I smoke.

They help us here because they care about us and they want to provide for their families.

Got myself tangled in a knot this morning between the tube attached to my drip and the draining tube protruding from my cast.

Woke up feeling like an escape artist ready to showcase a trick.

I glanced at Frans, my paraplegic neighbour who doesn’t speak English and he looked alarmed.

He shook his head with vigour: “No dude, you’re not.”

He looked as pleased as I was when I eventually got myself out.

While getting dressed I bumped my toe on the step next to my bed.

It felt like someone had lit my foot on fire.

I screamed. Loud. And I swore.

Again Frans shook his head, disgusted by my language and my lack of interest in my own wellbeing. But I know myself and the sad thing is that I’ll probably kick that step again.

The vacuum which operates my draining tube is leaking, so it doesn’t work properly. The nurses tried to tape it closed but that didn’t help.

There’s a brand new vacuum on the other side of the room, but they are inexplicably reluctant to swap them. I might do it myself when nobody is looking.

Michael has finally got a spot in theatre after being locked in a loop of starvation for the last few days. He’s got a stack of food in his cupboard which he will eat once they’ve fixed his hand.

Sikhumbuzo saw the physiotherapist again today. He’s recovering well but the physio says he needs to continue his daily exercises. She also tells him he’s getting better on the crutches. When he gets his strength back we can have a race.

Debra visited me yesterday. It was really nice to see a familiar face.

She assures me the kids are ok and she gave me a photo of our family to put next to my bed. She also brought me a razor and some shaving cream.

I’ll use that tomorrow.