Praise, honour for firefighters who fought Bank of Lisbon fire 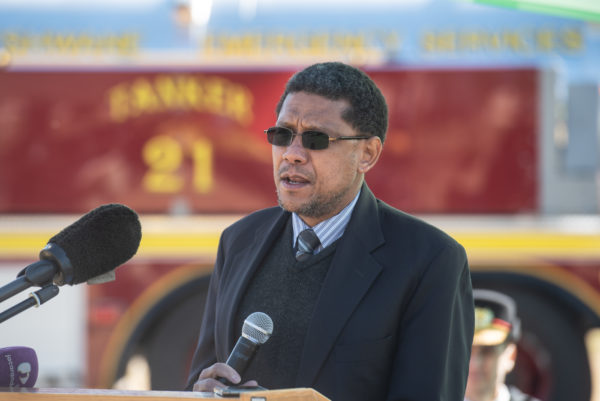 Tshwane mayor Randall Williams at the ceremony to hand out bravery awards to firefighters in Pretoria on 3 June 2021. Picture: Jacques Nelles

With their chins up and chests out, 17 firefighters from around the City of Tshwane were on Thursday awarded medals for bravery at the Rietondale Sports Grounds in Pretoria.

Tshwane’s Emergency Service Management (EMS) not only celebrated their 18 heroes – one medal was awarded in absentia – but also showcased 10 new emergency fleet vehicles.

Tshwane mayor Randall Williams, with the members of the mayoral committee (MMC) for community safety, Karen Meyer, had the honour of bestowing bravery medals to the 17 firefighters who were part of the Johannesburg’s Bank of Lisbon operation in 2018.

“They are the bravest for running towards danger to put out a fire and that deserves praise and respect,” Williams said.

Guests then received a tour of the new fleet of emergency vehicles, where they had an opportunity to get a closer look at the high-tech trucks with all the bells and whistles.

“This is the most powerful tool of the EMS of the city. If they would go to war or respond to an incident, this vehicle will empower them,” said EMS acting chief Moshema Mosia.

The 10 new emergency fleet vehicles included an industrial pumper with a water tank of 1893 litres and a foam tank of 2000 litres, which will be at Silverton fire station.

A foam tanker with a capacity of 2000 litres of water and 2000 litres of foam will be at the Rosslyn fire station to assist with the heavy industry area.

Wonderboom Airport received an airport rescue firefighting vehicle with a water capacity of 6000 litres. An armoured fire engine was also one of the new additions to the fleet, which is a one-of-a-kind fire engine that can be used during public unrest situations.

Onica Monchonyane, who has been a firefighter for 12 years, was the only female firefighter to receive a medal on the day.

“It is a struggle as a woman, especially in a field dominated by men, but I pulled up my socks and made my mark,” Monchonyane said.