Spending six weeks in hospital has taught sports writer Wesley Botton many lessons, but the greatest of all is never to go fishing ever again. 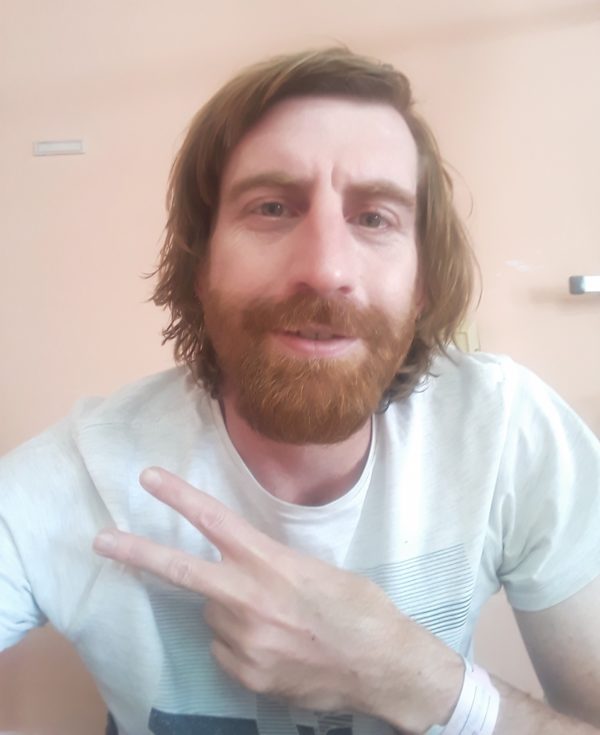 Some people have been here for months, so I mustn’t whine about it, but it seems a little crazy that I’m still in hospital. Six weeks sitting in a corner. The only other people who do this are prisoners and monks.

After three days without it, we have water again 🙂

Following the last shortage I stored 3.5 litres in my cupboard, but I had just about run out when the taps opened up again this morning. I’m just glad I don’t have to brush my teeth with Fanta tomorrow. It seems counter-productive.

Mr Hlabangana has gone home and, for the first time, Frans and I are alone in our room.

ALSO READ: Tales from a hospital bed: Choosing between wheels or crutches

We’ve had 11 roommates who have come and gone – Sikhumbuzo, Zozo, Bongani, Rennie, Kurt, Nathi, Brighton, Darian, Mr Hlabangana and the two Michaels – and it’s eerily quiet without them.

I wondered aloud if their spirits were now roaming the halls. Frans suggested this was an absurd notion. “They can’t be ghosts,” he said. “They’re not dead.”

And the doctors have decided I do need a skin graft, so that’ll be my fifth and final operation. It doesn’t sound like a pleasant procedure but once it’s done I’ll be able to hit the road.

We’re in the home stretch now.

Since I was a kid, my surname has been a problem.

Even when I spell it out, people invariably hear “m” instead of “n”, and just like that, I’m Mr Bottom.

I live each day dreading the thought that someone will ask me to state my full name. It’s a painful process.

Unfortunately, in this hospital, they ask me all the time. One of the problems here is that patients just leave and don’t come back. It gets the staff into trouble.

The result is a system which requires the security guards to take down our names at each ward on every floor of the building so they can monitor our movements.

So every time I leave my room, I have to stop multiple times to spell out my name. Frustrated by this, I decided to mix things up a bit by using pseudonyms.

Now when they ask, unless they check the tag on my wrist, they get a different answer. And the “can you spell my name” game has become a lot more fun.

Wesley Botton isn’t the easiest of names. I will give them that. But it’s much harder to spell Brighton McTrighton Wrightson.

Six weeks after being rushed into casualty at Helen Joseph Hospital, I am finally going home.

My injured toe is healing well, so a skin graft won’t be necessary, and my last course of antibiotics is complete, which means I can hit the road.

As glad as I am to be leaving, however, I don’t do so with joy in my heart. Our government should be ashamed by the state of public facilities like this.

The doctors are trying, but they need more assistance if they’re going to stand a fighting chance.

I hate that I must leave Frans here.

He has feeling in both his feet now and he can move most of his toes, so the doctors say he is likely to walk again. But he’s stuck in limbo until he can have his final op, and I just hope they get to him soon so he can get back to his family.

As for me, I’ve learned so much from this ordeal that I will carry it with me for the rest of my life.

Patience, gratitude, humility. All characteristics which will make me a better person.

But of all the things I’ve been taught, I will be sure to hold on to one lesson more than any other.

Tales from a hospital bed: Tokoloshe roommates, dealing with death and a little hope
5 months ago
5 months ago

Tales from a hospital bed: Prison tats, powerless Wolverines and homemade scones
5 months ago
5 months ago

Tales from a hospital bed: A lesson in patience and real equality
6 months ago
6 months ago

Tales from a hospital bed: Tokoloshe roommates, dealing with death and a little hope
5 months ago
5 months ago

Tales from a hospital bed: Prison tats, powerless Wolverines and homemade scones
5 months ago
5 months ago

Tales from a hospital bed: A lesson in patience and real equality
6 months ago
6 months ago