Officials are following up on registered cases of violence and more perpetrators will be arrested in due course. 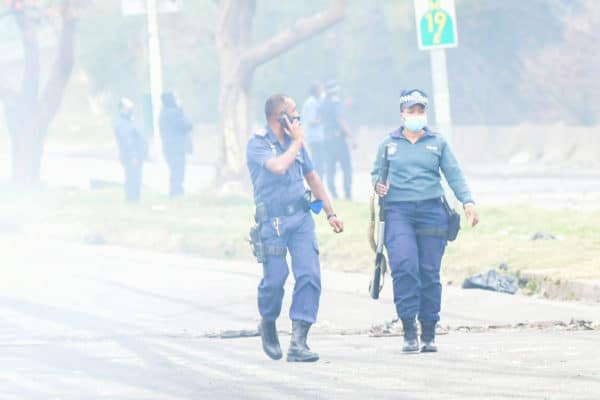 Brigadier Jay Naicker told The Citizen police officers have been mobilised from across to province to all major routes to “deal with the criminal elements responsible for recent incidents of lawlessness”.

Naicker said they’ll be focusing on enforcing the regulations of the Disaster Management Act, especially the convening of illegal gatherings and those who aren’t observing curfew regulations.

Operations are ongoing and Naikcer confirmed “a large number of people – 27 so far – have been arrested for incidents of criminality within in the province on Friday”.

In cases where people have not been arrested, officials have registered cases and will be following up on the investigations to ensure the perpetrators are brought to justice, he said.

Perpetrators have been charged with public violence, theft and damage to essential infrastructure. He says more arrests are imminent.

Update: As of 12:40 pm, the entire Mooi Plaza roadway remains closed while clean-up operations are underway. North- and southbound traffic are diverted; prepare for slow-moving traffic and delays.

A call for calm amid KZN shutdown

Zikalala said the protests in the province resulted in many commuters not being able to reach their places of work. He called on residents who protest “to do so through peaceful means and avoid violence and destruction at all cost”.

“We are fully conscious of the anger of the community but unfortunately, violence and destruction often affects and attacks people who are not involved”, Zikalala said.

NOW READ: Gauteng Shutdown: Protesters call for the closure of these major roads

Need an ID for elections? Home Affairs to extend operating hours
2 hours ago
2 hours ago

Need an ID for elections? Home Affairs to extend operating hours
2 hours ago
2 hours ago