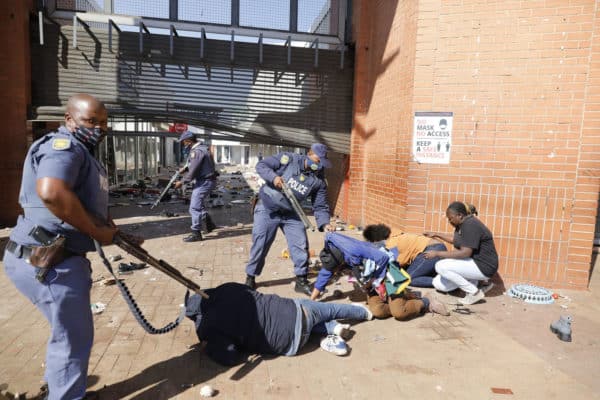 Government announced late Wednesday evening that the National Prosecuting Authority (NPA) will assign a team of prosecutors to oppose bail for the suspects arrested and charged with violence, looting and ‘economic sabotage’.

In addition, law enforcement officials were instructed to heavily enforce the Disaster Management Act regulations, including the 9pm to 4am curfew going forward, the president said.

Minister for Small Business Development, Khumbudzo Ntshavheni said the priority was to protect Covid-19 vaccine storage sites, as well as other facilities where vaccinations are being rolled out.

This follows after Ramaphosa met with religious and community leaders this week – who reportedly “support the deployment of the army to stabilise the situation”. He is set to meet with political leaders and other groups today.

“The leaders expressed support for government’s efforts in bringing stability to a number of areas where incidents of interest are taking place,” Ntshavheni said.

ALSO READ: Protests: Why not ask Zuma to end it?

Government said religious leaders requested communities to gather for worship while observing Covid-19 health regulations, in an attempt to restore calm and provide counselling during these troubled times.

“President Ramaphosa welcomed the concern expressed by interfaith leaders regarding events in the country and welcomed a proposal for a national day of prayer”.

The president plans to meet with business associations, traditional leaders and community leaders in KwaZulu-Natal and Gauteng to discuss the way forward.

“Tomorrow morning, Wednesday, 14 July 2021, the president will have a consultation with leaders of political parties.”

She said the Justice, Crime Prevention and Security Cluster indicated “all law enforcement and security agencies, including metro and traffic police, are working together to ensure public order policing, patrolling in identified ‘hotspot’ areas”, while protecting key public and private infrastructure.

NOW WATCH: Chaos a ‘ticking time bomb’ we should have seen coming