A police Constable and two suspects were killed during the shootout, rifles and explosives were seized. 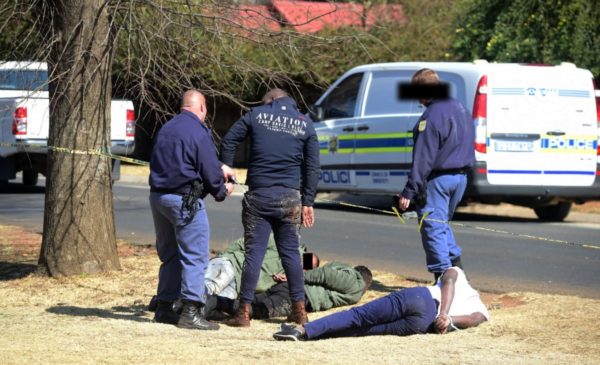 Three people were killed in Brakpan as police foiled a CIT robbery on Friday, 19 suspects were arrested. Picture Supplied.

A police constable and two suspects were killed during a shootout in Brakpan near Carnival city on Friday.

According to the police, 19 suspects were arrested for conspiracy to commit a CIT robbery, while seven rifles, explosives and nine vehicles were recovered among other exhibits.

She said that the suspects were allegedly conspiring to commit a cash-in-transit robbery.

Muridili added that one suspect fled the scene and hijacked a vehicle in his attempt to escape.

“A police vehicle with two members pursued a suspect who hijacked a VW Golf to flee the scene to the corner of Jubilee and Snyman Streets. Another shootout ensued between the suspect and the police officers where a police constable was shot. He died from his injuries on the scene while the suspect fled on foot,” said Muridili.

She said that four of the nine vehicles have been positively identified as stolen/hijacked while seven of the nine firearms were rifles (4 x AK47/3 x R5) and two were pistols.

“A bag containing live ammunition as well as explosives with the value still to be determined, were also confiscated. The Province has instituted the 72-Hour Activation plan to ensure that all the necessary resources needed to investigate this incident are mobilised. The team is following leads to track and locate the suspect allegedly responsible for the fatal shooting of the police constable,” the police said.