The Cremora is still not inside, and these new ads are tops

We’ve had some memorable slogans and catchlines which have transitioned seamlessly from an ad into everyday life and lingo. 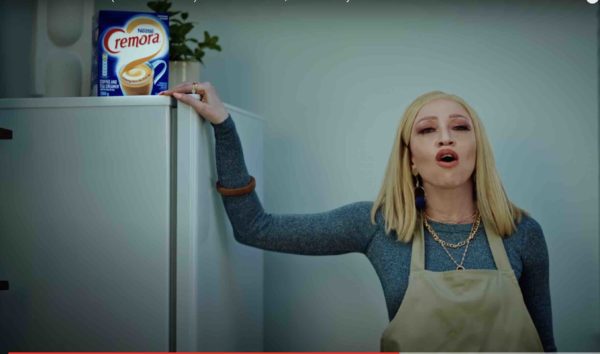 Without trying to sound like an old fart wallowing in nostalgia for the “good old days”, South African advertising has in years gone by proved that exceptional marketing can become part of the culture of a country.

We’ve had some memorable slogans and catchlines which have transitioned seamlessly from an ad into everyday life and lingo.

“Yebo Gogo”, the phrase which initially sparked an intense debate around racism as some white people viewed the Vodacom ads targeting them as “dof”, was one such line which began to pop up in everyday conversation.

No one had to explain why they were using it, and in the end, its gentle humour also help prick a few bubbles of racist superiority.

The original Lotto slogan “Tata ma Chance” also became commonly used, well outside what the creators of the line intended.

Klipdrift Brandy’s iconic “Met eish, ja” was also applicable in many situations a nod to the reality that, with our different languages, South Africans sometimes talk past each other.

One of the most iconic and memorable, and well used slogans from back in the day, though, was Cremora’s “It’s not inside … it’s on top”.

That could be used in any number of funny situations … clean or slightly off-colour, which probably explains its enduring popularity.

Even three decades after the original ads stopped running, the Cremora spot still makes it into compilations of best loved ads and, every now and again, the phrase itself gets hauled out of the memory banks by someone and reused.

Interestingly, when the ad broke cover, there were two versions (how very South African): one with a white character (stupid male, naturally) and one black (ditto with clueless male).

The script has the man ranting as he searches the fridge desperately looking for the Cremora he needs to turn his coffee into the perfect beverage, muttering as he throws items out. He believes: “She hides it from me.”

Eventually, she shouts out: “There’s no Cremora in the fridge!”, after which comes the iconic response: “It’s not inside, it’s on top!”

Now, Cremora has remade that ad into what it says will advocate for “inclusive representation”, which will “celebrate the Mzansi of today, all with a joyous twist.”

That celebration shows a diversity of different couples having the “It’s not inside, it’s on top!” discussion, including a multiracial couple, as well as a woman and her female partner.

There is even a man in a wheelchair … something I’ve not seen in a mainstream product ad in SA.

But the original idea still works brilliantly and the ads themselves are a perfect homage to that great original. They also still make the point that Cremora is so delicious that when you taste it you think it came from the fridge, where all real dairy products belong.

Orchids to Cremora for giving new life to a South African advertising icon and, in the process, cementing your product as a South Africa consumer icon.

Getting clever on social media is always a risk for brands, especially on platforms such as Twitter, where the biting barb is the order of the day and the “twitterati” are ready to prick any brand’s pomposity.

Standard Bank’s social media marketers clearly saw an opportunity to put up some sponsored content modelled on the Twitter poll form, which users often use to ask questions and get feedback on trending topics.

The bank, plugging its new app, asked users what they thought they could do on it … including the last option “duh, all of the above”, which attracted 84% of the votes.

Yet one Twitter user pointed out, quite correctly: “You’ve just described every online banking app’s features. What’s your USP (unique selling point)?” There wasn’t an immediate answer (and this has to be the case because Twitter moves on very quickly) … so opportunity lost to get a good message out there.

On the other hand, not answering leaves the distinct impression that perhaps the bank doesn’t have a USP…

To add insult to injury, someone pointed out the paltry 160 responses to the “poll” not being terribly indicative of a powerful brand.

An Onion, then, to Standard Bank for its How Not To Do Social Media 101 demonstration.