'The requirement for cooperation is going to challenge those in government and in the opposition … service delivery will be under threat,' said Henwood. 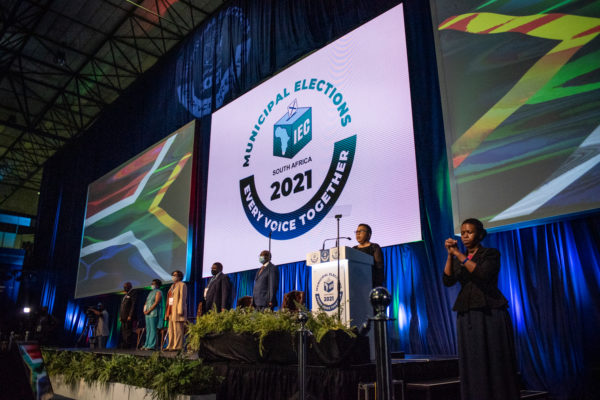 A view of the stage at the beginning of the announcement of the results of the 2021 municipal elections at the the IEC results center in Pretoria, 4 November 2021. Picture: Jacques Nelles

Minority parties have missed the coalition boat if their initial approach after the local government elections was to prevent the ANC from governing – something which has now put service delivery under threat, analysts said on Tuesday.

According to University of Pretoria politics lecturer Roland Henwood, the Democratic Alliance (DA) faced a difficult situation, having earlier said it did not want to form minority governments.

“The problem is that none of the other parties can, on their own, block or determine outcomes.

“The requirement for cooperation is going to challenge those in government and in the opposition … service delivery will be under threat,” said Henwood.

“Being in opposition is one thing, preventing governance is something else.

ALSO READ: Did EFF outfox DA and ANC in Johannesburg and Ekurhuleni?

“We expected the DA to have learnt some lessons in the past.

“Also, remember that the Constitutional Court found [in a case involving Tshwane] opposition parties may not illegally prevent meetings or decisions from being taken at local government level.

“The DA will have to be flexible and entertain some suggestions from opposition parties or – as indicated – walk away from governing as a minority party.

“This may backfire.” After voting then Joburg mayor Herman Mashaba in, the Economic Freedom Fighters walked away from Mashaba’s 2018-19 budget over what it deemed were excessive electricity and water tariff increases. The ANC also rejected it as “anti-poor”.

It took two more tries for Mashaba to have his budget passed, just before the end-June deadline. The ANC did the same thing in the same year in the Nelson Mandela Bay metro to then DA mayor Atholl Trollip, citing unfair allocation of funds to poorer communities as the reason.

Institute for Global Dialogue political analyst Sanusha Naidu said: “We should not be surprised in seeing these parties looking at what they want out of the coalition, calibrating with their interests, values and principles and the nonnegotiable elements.

“Opposition parties missed the brief on this one.

“They have said they brought the ANC below 50% – patting themselves in the back and being very congratulatory about what they did and taking pride in their campaign. But at the end of the day, the ANC is back in.

“That is the kind of situation you see in unfolding in Nelson Mandela Bay. The ANC mayor [Eugene Johnson] has been elected, which makes one wonder what this grandstanding is all about. Are they really thinking about making coalitions governable?”

Naidu said some political parties said they did not want to go into fragile coalitions but wanted stable alliances.

“Two weeks later, they are willing to go to oppositional coalitions and not necessarily ruling coalitions. How stable are these coalitions?”

Political parties were their “worst enemies, falling on their swords all the time”.

“The fact that there is tension between Mashaba and the DA has now come to pass. I don’t think political parties have been wiser than they have been in the past.”