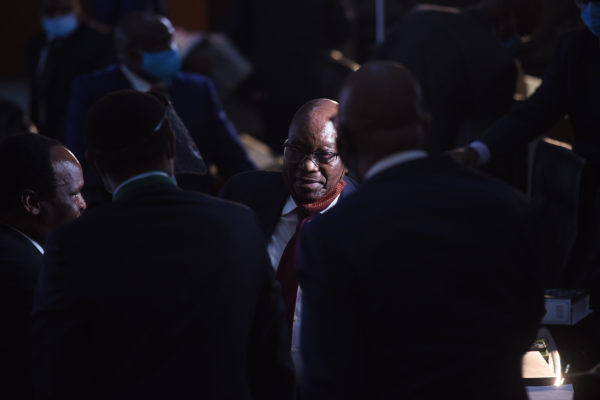 Judge Matojane has granted former president Jacob Zuma and the Department of Correctional Services leave to take his ‘go back to jail’ ruling to the Supreme Court of Appeals.

Zuma’s legal team tore into the Pretoria High Court’s recent order for him to return to prison on Tuesday morning.

“Not only is such an order completely out of kilter with any precedent, but it is also out of kilter with the law on parole or the meaning of parole in the very first place,” his advocate Dali Mpofu SC said when the case came before the same court again, for the hearing of an application for leave to appeal the order lodged by both Zuma and the Department of Correctional Service (DCS).

Jacob Zuma and the Department of Correctional Services have been granted leave to appeal to the Supreme Court of Appeal (SCA) against the ruling handed down by the Pretoria High Court last week which ordered the former president back to prison.

Their application for leave was heard by Judge Elias Matojane – who also delivered the ruling last week – on Tuesday and decided on the same day.

“In my view this matter merits the SCA’s attention to bring certainty on the correctness of the interpretation and application of [the Correctional Service Act’s provisions],” he said.

The Department of Basic Education (DBE) has introduced a new policy which will prohibit schools from excluding or expelling pregnant pupils, while making it compulsory to report cases of statutory rape to police.

Basic Education Minister Angie Motshekga last week gazetted the department’s policy on the prevention and management of pregnancy in schools.

The policy states that the rate of pregnancies in schools have become a “major challenge” for national development and the basic education system, prompting the new regulations.

Zondo seeks yet another extension for state capture commission

The Commission of Inquiry into Allegations of State Capture is set to approach the Pretoria High Court with an urgent application for yet another extension.

Chairperson of the commission, Acting Chief Justice Raymond Zondo has prepared to ask the high court for an extension until February next year.

In a statement released on Tuesday, Zondo explained that “a lot of progress have been made” over the past few months, but some parts of the reports “will still need further work beyond the end of December”.

“The commission believes that it should not compromise the quality of the report,” he said.

Judgment has been reserved “until further notice” in the second urgent interdict application against oil and petroleum giant Royal Dutch Shell.

Shell has been conducting a 3D seismic survey along the Wild Coast in the Eastern Cape since the beginning of December, to look for oil and gas.

Concerned residents and environmental groups are arguing the seismic blasting is taking place at the expense of marine life and violates several cultural rights of the indigenous people living on the coast.

This is the second legal battle Shell and the government is fighting in the Eastern Cape High Court in Makhanda.

The Special Tribunal on Tuesday dismissed an application lodged by flashy businessman Thabiso Hamilton Ndlovu, to halt the review application instituted by the Special Investigating Unit (SIU) and the National Health Laboratory Services (NHLS) against him and others.

Ndlovu wanted to stay the proceedings at the Special Tribunal pending the outcome of an application he intends to bring to the Johannesburg High Court against the South African Revenue Services (Sars), after it was granted a final provisional order in March this year to freeze his bank accounts and seize some of his luxury cars.