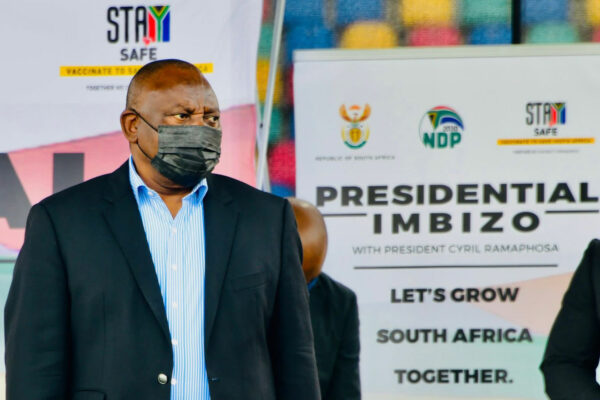 Presidential imbizo: R30m set aside to get rid of asbestos roofs in Free State

People from across the province gathered at Dr Petrus Monamela indoor centre in Bloemfontein during the Free State leg of the presidential imbizo on Saturday. President Cyril Ramaphosa and his Cabinet listened and responded to community’s concerns.

Residents didn’t hold back as they laid bare the lack of municipal services, corrupt government officials and periodic water and electricity cuts.

Kubayi said government would start fixing the old and dilapidated houses across the Free State townships.

“Human settlements has set aside R30 million as of 1 April to remove asbestos roofs in this province.

Speaking to journalists on Saturday before a presidential imbizo in Bloemfontein, President Cyril Ramaphosa condemned police operations in Diepsloot where foreign nationals have reportedly been stopped and asked to produce proof of their identity.

“We cannot accept behaviour like that where people are hunted down that way and asked questions that way about their identity, because it takes us back to the apartheid way of doing things.

“We are now in a democracy and we should be very restrained and respectful of the rights of people in our country,” Ramaphosa said.

Police in the Western Cape have launched a manhunt for suspects who gunned down a 61-year-old secretary at Primrose Park Primary School in Manenberg on Friday.

According to eNCA, the woman was on her way to work when she was shot on Kunene Road outside the school premises.

It is reported that Zuraya Barden was with her 6-year-old grandson when the gunmen fired several shots on the driver’s side of the window, fatally wounding her, but leaving the grandson unharmed.

A family member told eNCA that they believed the incident was a hit, as none of her belongings were taken.

The South Africa Weather service (Saws) has warned of disruptive rain and severe thunderstorms as well as heavy flooding throughout the weekend.

If you had an outdoor weekend planned, you might want to consider spending the next two days cosying up in your blankets, because these showers will be accompanied by cold weather conditions.

Rainfall and thundershowers are to be expected over the central and south-eastern parts of the country, which may damage informal infrastructure, cause localised flooding and possibly result in loss of life.

Provinces likely to be most affected are Gauteng, the North West, Free State and KwaZulu-Natal.

Saws has warned motorists to expect dangerous driving conditions as roads will be flooded.