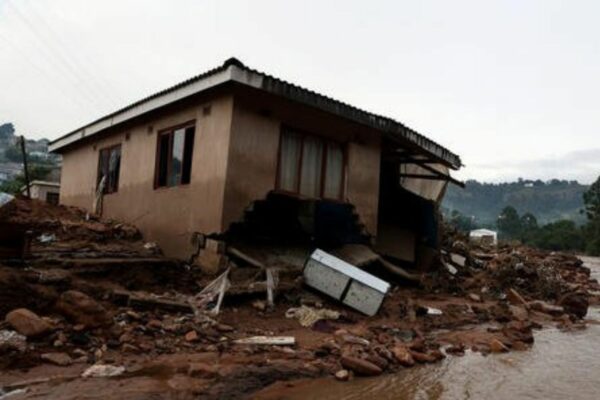 KwaZulu-Natal premier Sihle Zikalala has urged communities living near river banks to monitor the rivers and evacuate immediately if they notice the river rising.

Zikalala’s warning comes after the South African Weather Service (Saws) increased the weather warning to a red level 10 in KZN which is the highest warning to be issued, for some coastal areas in province

The Weather Service said that water levels on the roads and rivers is expected to increase due to the torrential downpours.

The KwaZulu-Natal Department of Cooperative Governance and Traditional Affairs (Cogta) has warned communities in low-lying areas to seek shelter on higher ground.

This comes after the South African Weather Service (Saws) increased the weather warning to a red level 10 in KZN which is the highest warning to be issued, for some coastal areas in province.

The weather office said the widespread showers and thundershowers are expected across KZN as a result of a cut-off low associated with a surface high pushing in moisture over the eastern parts of the country.

“Nare and Polo from Sani Mountain Escape at the top of Sani Pass took these photos earlier. It appears that the snow is quite far down the pass but we can’t tell how far yet. More snow is expected today and tomorrow so the conditions on the pass will likely make it impossible to drive in any vehicle for a little while.”

Eskom has announced that it will implement stage 4 load shedding from 1pm on Saturday afternoon.

In a statement on Twitter, the embattled power utility announced that they would need to move from Stage 2 load shedding to Stage 4 from 1pm until 10pm on Saturday night.

It also said that stage 4 load shedding would be implemented from 8am to 10pm on Sunday as demand is higher than anticipated due to some units tripping.

The Department of International Relations and Cooperation (Dirco) has slammed media reports that hundreds of ex-Islamic state or Isis fighters have been receiving assistance by government to be repatriated to South Africa from Syria.

Media reports over the weekend indicate that hundreds of South Africans and their families were being provided with new identity documents by Pretoria as a means to resettle in South Africa.

The reports said the repatriations had been done through Dirco and the Department of Home Affairs, with the approval of the State Security Agency (SSA).

Last weekend, South African airspace could have ended up like a typical day on Joburg’s roads.

Instead of traffic lights being out of order and absent pointsmen, airspace controls were switched off.

Pilots flying in the affected regions were on their own. A notice to pilots (Notam) was issued last Saturday by Air Traffic and Navigation Services (ATNS), which controls South African airspace, saying parts of the country’s skies had been downgraded to class G.