The DA leader has called on the president to 'end his silence and be honest with the nation'. 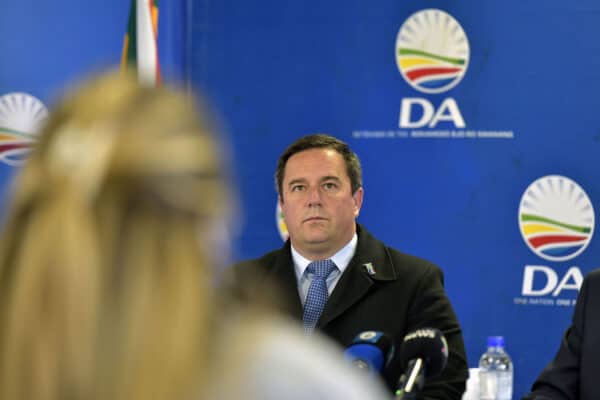 DA Leader John Steenhuisen briefs media about their plans to investigate the money found at President Cyril Ramaphosas farm at a briefing in Bruma, 21 June 2022. . Picture: Neil McCartney / The Citizen

While Ramaphosa has repeatedly called for due processes to take place, Steenhuisen said this was no justification for his refusal to answer questions.

“President Ramaphosa should end his silence and be honest and open with the nation about his involvement in the DollarGate saga.

“That the matter is ‘being investigated’ is no justification at all for his refusal to answer the many reasonable questions that have arisen,” the DA leader said.

“Specifically, we have requested that the FBI considers investigating the source of the funds and whether the money was brought into South Africa legitimately and declared to the appropriate authorities,” he said.

“We have recommended that the ledgers or journals, which would have recorded the alleged sale of wild game at auction, be requested from the president to determine the identities of those involved in the suspicious cash transactions.

“A cash transaction within South Africa involving $4 million is deeply suspicious, and more so since the cash was then hidden in furniture, and its theft investigated off-the-record and covered up,” the DA leader added.

He further said the party had also written to the Financial Intelligence Centre (FIC) about whether it was aware of the purchases made from the burglary proceeds.

“The FIC has a legislative mandate to identify the proceeds of crime in terms of the Financial Intelligence Centre Act of 2001.”

The DA leader said he was concerned about whether the use of US Dollars was declared to Sars and if the transaction had tax implications, in terms of both the Income Tax Act and Tax Administration Act.

“We have submitted written questions to the President and urged him in Parliament to come clean,” he said.

The DA wrote to Cabinet’s secretary Phindile Baleni asking for Ramaphosa’s declaration of financial interests to be made public.

“Specifically, we want to determine if the business activities on the President’s Phala Phala game farm have been declared as financial interests, and when such declarations were made.”

The DA also wants the Public Protector’s office to probe whether Ramaphosa violated the Executive Members’ Ethics Code by not reporting the crime to the police.

However, the office is already investigating Ramaphosa and the report into the theft is expected be completed in 30 days.